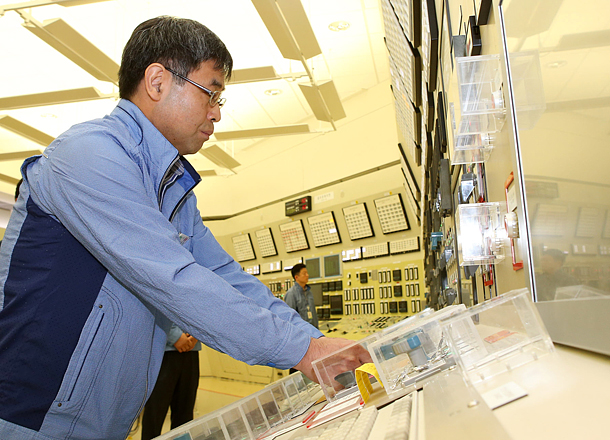 An employee of Korea Hydro and Nuclear Power manages the Kori-1 reactor from the main control center of the nuclear power plant in Gijang, Busan, on Sunday. [YONHAP]

On Saturday, the Korea Hydro and Nuclear Power Company, a state-owned utilities provider, cut off power supply to the Kori-1 reactor in Gijang, Busan, the first step in decommissioning the power plant that has provided electricity to the country for four decades.

After power supply was cut off to the plant, the temperature of the reactor was expected to fall to 90 degrees Celsius (194 degrees Fahrenheit) by midnight Sunday from 300 Celsius degrees. After reaching 90 degrees, the reactor can be officially decommissioned, the power company said.

Korea Hydro and Nuclear Power will then need to transfer the remaining nuclear fuel to storage, a process that will likely take five years. Disassembly will take another 15 years, the company projected, and disputes over where to store the fuel could further delay the timeline.

In terms of cost, the company estimates 634.7 billion won ($560.2 million) will be needed to run the lengthy and delicate procedure. Despite the high cost, Korea Hydro and Nuclear Power decided to shut down the reactor because of inherent risks associated with older nuclear reactors. The Nuclear Safety and Security Commission, a government agency, also recommended permanent closure of the Kori-1.

Concerns surrounding Kori-1 mounted last year after an earthquake hit the nearby city of Gyeongju, North Gyeongsang, in September. Due to the age of the plants, locals became worried that another strong quake could damage the plants and expose them to nuclear contamination.

The move is also in line with the new Moon government’s plan to shut down all 25 nuclear plants in the country in the next 40 years.

Kori-1 is Korea’s first nuclear reactor. Construction of the facility began in 1971 with support from the U.S. government and Westinghouse Electric Company, an American nuclear power company. It began commercial operation in April 1978. Since then, the reactor has produced some 150 million megawatts of electricity, enough to power the city of Busan for 34 years.

Back then, it was a landmark construction project, costing $300 million, a quarter of the government’s entire annual budget.

At the time of completion, the lifespan of the plant was estimated to be 30 years, but the government decided in December 2007 to extend its operation for another decade.