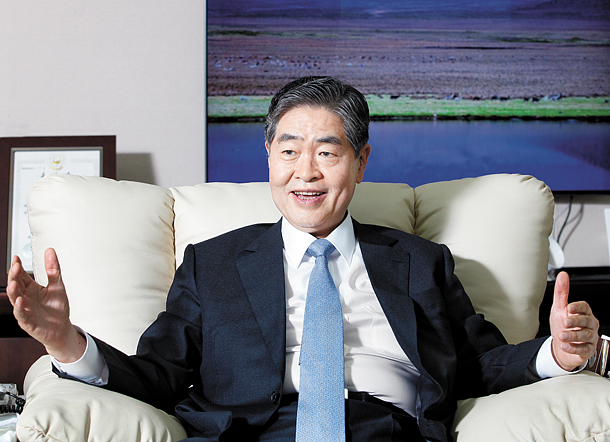 Younghoon David Kim, chief executive officer of Daesung Group and chairman of the World Energy Council, at his office in Insa-dong, central Seoul. Kim and Daesung Group are hosting a conference Thursday on microbial fuel cells as an energy resource. [PARK SANG-MOON]

Daesung Group, a Korean conglomerate specializing in the energy business, including city gas and renewable energy, celebrates its 70th anniversary this year. To mark the anniversary, the company will host an energy conference under the theme of “Mighty Microbes for the Energy Revolution.”

Younghoon David Kim, chairman and CEO of Daesung, says microorganisms may hold the last piece of puzzle in providing sustainable energy sources. For this reason, Kim has chosen microbes as the focus for the conference.

Kim also is chairman of the United Nations-accredited energy body World Energy Council. He is the second person from Asia to head the London-based organization, which was founded in 1923.

“I believe my appointment as the head of the council is a part of what we call ‘Grand Energy Transition’,” Kim said Wednesday at his office in Insadong, central Seoul. “The global energy industry is moving away from being resource-based and capital intensive to knowledge- and technology-based, as humanity searches for sustainable energy sources.”

Kim believes in the next few decades, humans will be less reliant on fossil fuels and will turn to other energy supplies. The Organization of the Petroleum Exporting Countries said in a recent report that, “[Oil’s] relative weight [in the global energy consumption] will decline in the next decades. By the 2030s, oil is expected to drop below 28 percent. A similar trend is expected for coal.” Major oil exporters such as Saudi Arabia have begun seeking industrial diversification. Saudi Arabia’s state-run project is titled Vision 2030 and Korean companies including automakers and shipbuilders are participating in the initiative.

The WEC chairman also emphasized that humanity is facing energy crisis. He said a concept called the Energy Trilemma, which refers to energy security, sustainability and equity, can simplify this crisis. “While we are looking for ways to overcome the trilemma, we have yet to find the optimal solution,” said Kim. “We need a place where scientists and experts can get together to discuss policies and technologies that take all three issues into consideration.”

Kim’s company has tried to address some of the issues.

Daesung found opportunities in the vast Gobi Desert, a hostile environment for life. Securing sustainable energy sources were nearly impossible for locals in Naran Soum, Mongolia. Still, the region has abundant sunlight and wind. Since 2003, Daesung has built solar panels and wind turbines, as well as generators and an energy storage system. 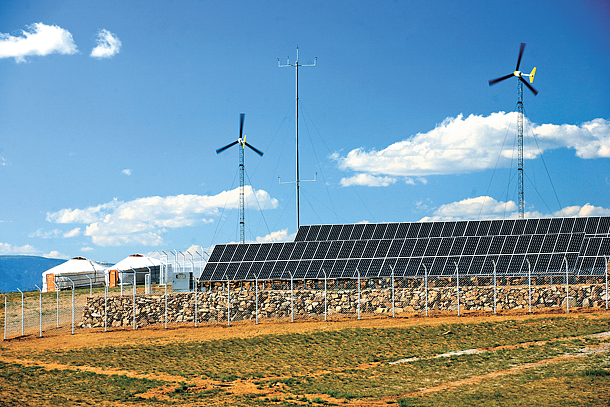 SolaWin system has been installed near Ulaanbaatar, the capital city of Mongolia. The SolaWIn project by Daesung Group utilizes a hybrid system of solar and wind power to provide energy. [DAESUNG GROUP]

“It was a part of our business initiative called SolaWin Project,” explained Kim. SolaWin Project is a public service project to provide renewable energy by using a complementary system of solar and wind power.

Daesung Group installed the system in two more areas in Mongolia in the next few years. It even helped locals fight off desertification by creating farms and grassland. As a result of the contribution, Kim received in 2008 the Order of the Pole Star, the highest honor given to foreign nationals by the government of Mongolia.

Following is an edited excerpt of Kim’s interview:

Q. Why is Daesung Group focusing on renewable energy projects?

A. The global energy industry is experiencing a grand energy transition. Before, whoever owned the resource [fossil fuel] had the upper hand in the industry. But now, companies like Tesla with technology and knowledge are becoming the central players. I would like to call fossil fuel and coal “black energy” sources, because of their color before refinement. The advancement of technologies in the energy sector enables us to depart from black energy sources to more environmentally-friendly sources such as wind and solar, which are often referred to as “green energy.” This is why Daesung Group has been trying to provide sustainable and renewable clean energy to consumers in Korea as well as abroad. The SolaWin project is part of that initiative. But now, I believe we can find a sustainable energy solution in what I call a “blue energy” source.

Can you elaborate on what “blue energy” is?

Blue energy comes from the phrase blue ocean. The term has a double meaning, referring to the market yet to be contested and the color of the ocean. I think humanity is at a juncture where we need to procure more diverse energy sources. Microbial energy holds great potential but it is a territory yet to be explored. Another reason why I call it blue energy is because over 90 percent of microbes reside in the ocean.

What triggered your interest in microbial energy?

Daesung Group began a project in 2006 to produce energy from landfill gas. It was a part of our environmental energy initiative. We covered the landfill in Daegu with soil. The covered waste generated methane gas in the process of decaying. What we learned is that microbes excrete the gas by feeding on the waste, which is eventually turned into energy. Then I met a professor at World Economic Forum at Davos, Switzerland, who ran a robotics research center in Bristol, England. His lab was conducting research on microorganisms that fed on organic matter to produce electricity. I saw actual robots operating using this microbial energy. Furthermore, microbial energy storage system has gained ground over the years through continuous research. Studies have shown that microbial batteries can store and produce electricity in the process of decomposition. What happens here is microbes feed on matters and produce methane. The microbe-produced methane can be stored and eventually converted into energy through combustion when necessary. The current technology allows us to generate electricity through a similar process as demonstrated from Daesung’s project in Daegu. For economical reasons, it is difficult for us to industrialize [microbial batteries] on a larger scale. But once we can apply this technology at an industrial scale, I believe it can resolve the conundrum of finding stable energy storage systems.

Then how will microbial energy be able to untangle the “energy trilemma”?

Microbial energy and energy storage system can be the game-changers. Coal or oil causes regional inequity because they are concentrated in certain parts of the region. But given that over 70 percent of the world is the ocean, using microbes as energy source would eliminate, or at the least minimize, this inequity problem. It could also settle the security issue if we can produce microbial batteries on a larger scale. Leading energy companies around the globe are trying to develop more stable energy. Still, most of the storage system is lithium-based. If the companies were to cover the energy needs of the entire world, they would need an astronomical amount of lithium.

Even at the World Economic Forum, experts recognized the need of breakthroughs in storage systems. This is why microbes, available in abundance and easy to cultivate, can be an ideal alternative. In the case of sustainability, the supply of coal and oil is relatively stable right now but they are not sustainable. Renewable energy sources are considered sustainable because they don’t harm the environment and widely available. However, solar and wind energies require expensive infrastructure, which means it is difficult for the developing world to rely on them as a central energy source. This is why we need an alternative source of energy. Fusion-based energy is being highlighted as the ultimate solution but it’s far from being perfected, let alone advanced enough as a stable source.

What are some issues that require a joint effort by the public and private sectors for the development of microbial energy?

Discovering new technologies and commercializing them require a tremendous amount of investment into research and development. I have seen companies with state-of-the-art technologies go under because they lacked financial support. I myself would like to cultivate talents such as Michael Faraday [who invented the electromagnetic rotary system that was the foundation of electric motors, the impetus of second industrial revolution] and connect them with potential investors. And this is what the latter part of the name of our conference stands for: IICE or Inventor-Investor Close Encounter. A total of six enterprises doing research on microbes will present their work in front of some 30 venture capitalists during the conference.

What can Korea do to not lag in the global energy market?

Before, global energy market was supply-centric. Now, it is shifting to bring more demand-centric. This means whoever can better satisfy the needs of the consumer can gain the superior position in the market. This requires knowledge and technologies. Korea has the competitive edge especially in information and communication technologies right now. It is also one of the leaders in energy storage systems. Korea must exploit this and procure the necessary means in advance. To lead the global energy market, Korea must diversify its energy portfolio and invest aggressively. Solar and wind energy fields are already red oceans, dominated by China and India, which is why companies like Daesung Group must bet on other sources of renewable energy such as microbes. This is a different matter from renewable energy but Korea already has the competitive edge in various sectors including tidal and nuclear power. The Sihwa Lake Tidal Power Station, for instance, can produce a substantial amount of energy, enough for the government to export. The government is also considering closing the nuclear power plants around the country. But Korea is one of the few countries that have the capacity to design, construct and operate nuclear plants. Such are valuable assets that could raise the country’s standings in the global energy market if used properly.