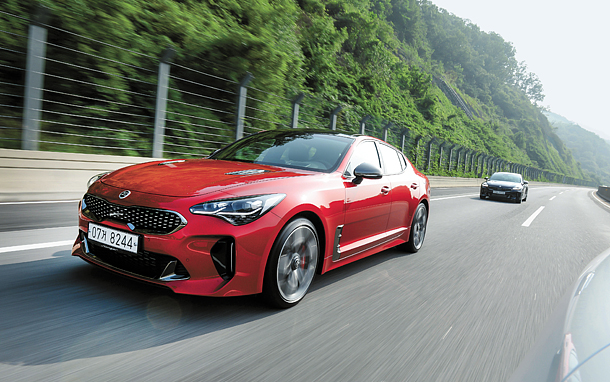 Kia’s Stinger is a good fit for younger drivers who want a vehicle that can complement their style. [KIA MOTORS]

The Stinger launch is a big deal for Kia Motors. Not only is it the automaker’s first foray into the premium sedan market, aiming to start a rivalry with premium German carmakers, but it is also its first rear-wheel-drive sports sedan in a segment judged by a complex web of standards such as design, speed, power, sound and safety.

How the Stinger performs will determine the future direction of Kia Motors: whether it will continue to invest in a premium lineup or ditch it to be remembered as a failed attempt.

Kia Motors, for the first time, equipped the Stinger with Level 2 autonomous driving technology that allows drivers to take their hands off the steering wheel for a few seconds, with the help of what’s called highway driving assist. The car is able to stop, accelerate and turn on its own. It also has smart cruise control, lane-keeping assist and driving attention warning systems.

To see what the car can really offer, a Korea JoongAng Daily reporter got behind the wheel of a high-chroma red Stinger GT, the most expensive of which costs 48.8 million won ($43,040), and took it on an 80-kilometer (50-mile) course from Walkerhill Hotel in central Seoul to Museum SAN in Wonju, Gangwon. 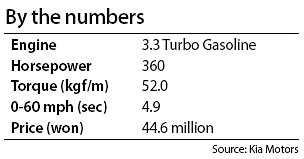 Stinger lived up to everything Kia has been saying about the car, such as its official 4.9 seconds time to reach100 kilometers an hour from zero or having a powerful engine with a horsepower of 360. The car went from 0 to 100 in 4.9 seconds when tested on a road by a novice driver.

The car has five driving modes - eco, comfort, sports, smart, and custom. On an urban road where excessive speed and noise are not much appreciated, the car can run in comfort mode. The transmission, steering wheel and range of artificial engine sounds are adjusted according to the mode.

In the comfort mode, the handling felt lighter and the suspension was smoother. It didn’t feel like driving a performance-oriented sedan at all.

However, when the car exceeded 120 kilometers an hour on a highway, the sounds generated from the ground and wind were extremely loud.

This is the moment to shift to the sports mode where the handling gets heavier and the noise generated from outside is minimized to fill the cabin with engine growls - part real and part artificial.

When the accelerator was pushed to its extreme, the Stinger shot out on the road, which thankfully was empty during the test drive, to the point where the reporter’s head jerked backward. Reaching 160 kilometers an hour happened in the blink of an eye and changing lanes or abruptly halting didn’t intimidate the driver nor the passengers.

Compared with the Genesis G80 Sport which the reporter test drove last year, the Stinger had more perks while the G80 Sport was more oriented toward providing an elegant ride at a high speed. The Stinger, which has a rougher driving performance, is a good fit for younger drivers who want a vehicle that can complement their style.

The car brimmed with style in every nook and cranny. From a signature bright-red to a toned-down charcoal or night blue, the Stinger comes in flashy color options designed to attract a younger demographic.

Its front face is equipped with a signature tiger-nose grille engraved with its first standalone emblem: E. From this point, it was apparent Kia Motors, an auto company that has built its name on being cost-effective and practical, is trying different approaches to the changing paradigm of the domestic and foreign car industry.

The car stood out the most when viewed from the side. The fluid sideline connecting the low-positioned front hood to the roof was fittingly as steep and dynamic as any other sports sedans.

And its elegance found its way to the rear, which was positioned relatively high so the sideline on the rear overhang drew almost a horizontal line, a trendy design feature in premium cars.

The interior was where Kia Motors’ attempt at luxury really came to light. The reddish Napa leather-covered seats were luxurious and comfortable. A Kia Motors spokesperson said even the space between the stitches on the passenger seats were closely checked during manufacturing to give the drivers a “special experience.”

In Korea, 2,700 consumers have placed orders for the Stinger in the first 19 days, which is 2.7 times its initial monthly sales goal.