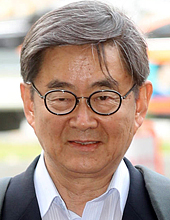 Justice Minister nominee Ahn Kyong-whan’s withdrawing himself from consideration on Friday night after controversy over ethical lapses has sparked questions about the presidential office’s vetting process for cabinet nominees.

Just hours after making clear a determination to hold onto his nomination during a press briefing early Friday, Ahn made an abrupt volte-face at around 8:30 p.m. and said he was giving up.

Acknowledging the gravity of the ethics charges, Ahn said in a statement that he would give up his nomination because he didn’t wish to become an “obstacle in the way of the Moon Jae-in government’s reform agenda.”

While the 69-year-old former head of the state-run human rights watchdog faced a number of ethical breach allegations, the most damning involved his signing of a marriage registration in 1975 and allegedly forging the official seal of the bride. A court nullified the marriage in 1976 after the woman reported the alleged forging.

The presidential office said it had not been aware of the 1975 incident until it was reported on Wednesday, raising questions about its vetting process.

The emeritus professor of law at Seoul National University apologized during the press briefing on Friday, saying he could not excuse his “wrong” and “shameful” behavior four decades ago. But he said he had no intention of walking away from the job - only to change his mind later.

He became the first ministerial nominee of the Moon government to give up a nomination under the kind of scrutiny that finds skeletons in closets going back decades. Moon is being criticized for rewarding past associates despite troubled pasts.

Ahn was a member of the legal team defending President Roh Moo-hyun in a 2004 impeachment trial at the Constitutional Court. Moon served Roh as his chief of staff. Ahn also has a long working relationship with Cho Kuk, senior presidential secretary for civil affairs, at the law studies department of SNU.

Vetting blunders could continue. Kim Sang-kon, tapped to lead the education ministry, is facing allegations of plagiarism of his master’s and doctoral theses. The Blue House touted Kim as the perfect candidate to fix educational problems, but it’s also true that he has a deep relationship with the president.

Kim was co-chairman of Moon’s campaign. In 2015, Kim was tapped by Moon, Democratic Party chairman at the time, as the party’s reform committee chief. Kim’s set of proposals aimed at reforming the party drew an immediate backlash from party lawmakers not aligned with the pro-Moon faction, especially from Ahn Cheol-soo. The protest led to mass defections and the creation of the People’s Party co-founded by Ahn.

The opposition is also intent on challenging employment and labor minister nominee Cho Dae-yop in a confirmation hearing this week. Cho is under fire for a driving-under-the-influence fine 10 years ago. Cho, a Korea University professor known for his labor policy studies, was a member of Moon’s inner policy advisory group, Simcheonhoi, that helped him with policy issues between 2013 and 2017.