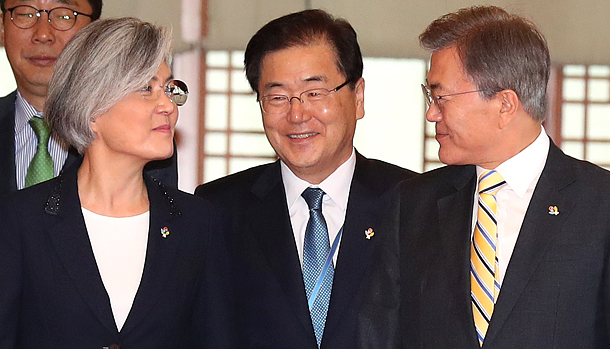 Following weeks of controversy over Kang’s ethical breaches, especially a fake residential registration to allow her daughter to attend a school of her choice 17 years ago, Moon officially named the former United Nations official as foreign minister, making Kang the first female and non-career diplomat ever to lead the ministry responsible for foreign affairs.

Moon’s appointment was expected given his unwavering support for Kang, who began her diplomatic career as an English translator for former President Kim Dae-jung, even in the face of the oppositions’ strong objections.

Saying he “regrets” the opposition’s refusal to confirm Kang officially at the National Assembly, Moon stressed he could not continue to have Kang’s fate up in the air with a summit with his U.S. counterpart Donald Trump coming at the end of this month and a G-20 summit starting in Hamburg, Germany next month.

“[I am] in a situation in which I can’t leave the top diplomatic post vacant [anymore],” said Moon during an appointment ceremony held at the Blue House to Kang, who was accompanied by her husband. “I hope the opposition understands our situation. From now, you must show your skills [as the top diplomat],” said Moon.

Praising Kang as someone who already proved her qualification in international diplomacy as a UN official, Moon called on her to “expand Korea’s diplomacy” on the global stage and prove those who opposed her nomination wrong.

As a non-career diplomat, Kang did not take or pass the state examination that produces diplomatic officials, which is known for its difficulty.

Critics of the foreign ministry say that it has overly narrowed the candidates for Korea’s top diplomatic post.

Moon said that while the Foreign Affairs Ministry was “filled with many qualifying elites,” its internal structure was “too exclusive” in an apparent jab at ranking officials there.

Responding to Moon’s remark, Kang said there was a need to expand the ministry’s depth of talent by recruiting experts from outside and streamline inefficient processes at the ministry.

Following the appointment ceremony, Kang went straight to the Foreign Affairs Ministry in Gwanghwamun Square, central Seoul, and presided over a meeting of senior ministry officials. She has only 10 days to prepare for Moon’s first meeting with U.S. President Trump in Washington that will undoubtedly deal with North Korea’s missile and nuclear programs and the deployment of a U.S.-operated anti-missile system in Korea.

Moon’s appointment of Kang came 28 days after her nomination. Kang quickly found herself in a maelstrom of allegations of ethical breaches, particularly her fake residential registration. The three opposition parties refused to adopt an outcome report for a confirmation hearing to object to her appointment and warned of consequences if Moon went ahead with the appointment.

Aside from the prime minister, cabinet ministers go through confirmation hearings but are not required to pass them to be appointed.

The largest opposition Liberty Korea Party (LKP) wasted no time in condemning Moon’s appointment of Kang on Sunday, calling it a “declaration” that the Blue House would not seek cooperation with the opposition.

“All problems stem from President Moon’s wrong personnel appointment,” said LKP chairman Chung Woo-taik at a party meeting at the National Assembly on Sunday. He said Moon’s appointment of Kang was illustrative of his “arrogance and self-righteousness.”

The LKP leader signaled his party would not cooperate with the ruling party and the government on passing a supplementary budget bill worth 11.7 trillion won ($10.3 billion) designed to help create jobs, saying the prospect of bipartisan cooperation on legislative matters has become “extremely difficult.”