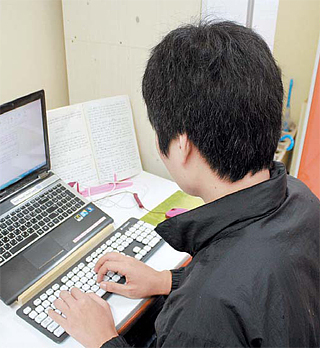 There were 69,232 people admitted to psychiatric hospitals across the country as of last year. Of these, 42,684, or 61.6 percent, were committed involuntarily - compared to 17 percent in Germany and 13.5 percent in the United Kingdom.

Revisions to the Mental Health Act, which limits involuntary commitment, came into effect on May 30 in response to concerns over human rights violations. The JoongAng Ilbo held in-depth interviews with 11 patients with schizophrenia or their families and with four people involved in the administration of psychiatric facilities.

Jeong Hyeon-seok, 44, first showed signs of having schizophrenia as a freshman university student. His mother refused to acknowledge the illness and instead paid 400 million won ($357,000) for a shamanistic exorcism.

A female schizophrenic in her late 20s suffered from delusions that a stranger was constantly replacing her belongings. She even set fire to own her home. Her mother was unaware that this was a manifestation of schizophrenia.

“If I had known it was an illness,” her mother said, “I would have started her on treatment sooner and not been so hard on my child.”

“I received a diagnosis of schizophrenia after my military discharge,” a man in his 20s said at the National Center for Mental Health on May 18, “and though I was admitted to a private hospital, the facilities were dreadful, they had no windows and it felt like a prison.”

In a dispute between a mother and a daughter over inheritance, the Constitutional Court made an ex post facto decision regarding involuntary commitment last September.

The daughter had compelled her mother to be twice committed for depression when it was revealed the latter suffered from no such condition.

The UN Committee on the Right of Persons with Disabilities called for the abolition of involuntary commitment in 2014.

In addition to safeguarding human rights, this would also drastically improve the ratio of caretakers to patients. One community mental health center in Gangwon, for example, employs four specialist nurses to care for its 270 patients.

“The yearly budget of 170 million won is spent on nurses’ personnel costs and the program,” said one staff member at the center.

On average, a healthcare provider in Korea oversees the treatment of 70 people. But alleviating the strain on health centers does not solve the problem - it only shifts it elsewhere.

After being discharged six years ago, one 46-year-old surnamed Park, who has schizophrenia, was subsequently admitted to a residential facility where she was active in the reading group, formed relationships and eventually registered for housing.

Now, she is preparing to publish a newspaper for patients while working as a human rights advocate for people with disabilities.

These facilities now hold about 9,000 people, but with the revision of the Mental Health Care Act, the National Mental Health Commission (NMHC) estimates an additional 6,084 to 7,871 people will require access.

“In order to accept additional patients,” said Lee Hae-kuk, head of the NMHC, “there must be 3.5 times more rehabilitation facilities than there are now.”

But that is easier said than done.

“It’s difficult to open more mental health facilities because local residents oppose them,” said Ko Gwang-sin, director of a mental healthcare facility named Byeoljari, “and it isn’t easy to expand these facilities for even if they open, you need two years before you can receive government aid.”