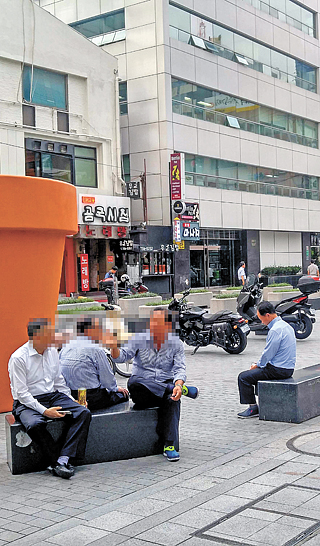 A section of the pedestrian road in front of Child Fund Korea before it was transformed on May 22 shows men sitting and smoking around illegally parked motorcycles. [CHO MUN-GYU]

Sitting under a coffee table parasol on the artificial grass beside Mugyo Road in central Seoul, Kim Bo-ra, an office worker, said she looks forward to coming to this area during lunchtime with her coworkers.

“We would pass by this area during lunch but it was difficult to walk through because of all the illegally parked motorcycles,” Kim said. “After the area was transformed, my coworkers and I frequent this area after lunch. The atmosphere here is so much brighter now.”

Previously, 18 black rectangular blocks were installed at the site to discourage the illegal parking, but they did not stop drivers and usually invited more office workers to sit down to smoke, so the Seoul Metropolitan Government and Child Fund Korea transformed it.

Dubbed the “Sharing Square” by the city government, the 247 square-meter (2,658 square-foot) patch of green in front of Child Fund Korea started offering coffee tables with green parasols to passersby on May 22. Since then, office workers in groups of two or three have quickly become a common sight here during lunch hour.

The transformation is part of the city government and local businesses’ Urban Rejuvenation Project, intended to liven up Seoul’s dilapidated and less frequented areas by boosting their foot traffic to help local businesses.

As part of the ongoing project, a surprise pinata game and fashion show and more projects were carried out by the city government and associations of local merchants and businesses at Mugyo Road during lunch hour from May 22 to 27. About 5,000 passersby participated, according to the city government.

“We are hoping to increase foot traffic in the Da-dong and Mugyo-dong area with the Sharing Square,” said Yeo Jang-kwon, head of the Urban Revitalization Division of the city government. “Increased foot traffic even during the weekends should help local businesses thrive.”

In addition to lightening up the atmosphere on Mugyo Road, the Sharing Square serves another purpose: raising charity funds. 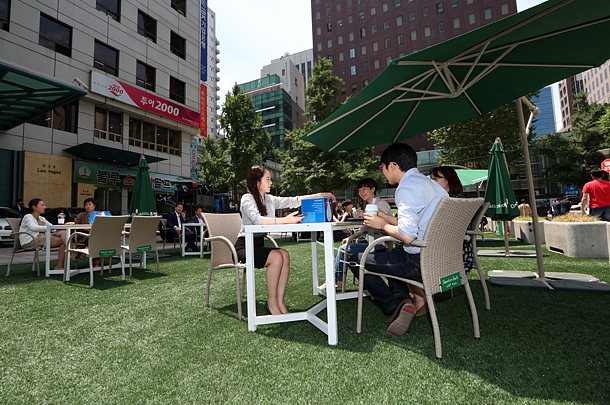 A section of the pedestrian road in front of Child Fund Korea next to Mugyo Road in central Seoul has been transformed into a space filled with coffee tables and benches for passersby as part of the Urban Rejuvenation Project of the Seoul Metropolitan Government. [CHO MUN-GYU]

Each chair installed on the square has a sensor attached, which counts the number of people who sit down. Businesses who are pitching in on this project agreed to donate together 10 won for every time a person sits on a chair, and the donations will be sent to various Child Fund Korea programs.

The Seoul Metropolitan Government is looking to extend the program next year to more businesses and foundations who would like to renovate areas near their businesses. It is planning to receive applications from interested businesses next year.

“We are still in the process of determining how the budget should be planned on these projects, and how much the city government and participating businesses are to pitch in,” said Jin Hee-seon, head of the Urban Space Improvement Bureau.