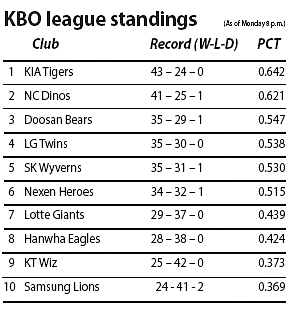 During their game against the Nexen Heroes at Gocheok Sky Dome on Sunday, the Giants lost 14-3.

In addition to their three-game weekend series loss, the Giants are now in a six-game losing streak, which is the most number of consecutive losses this season. Prior to the season, Giants fans regained hope with the return of Lee Dae-ho, but now, the team has dropped to seventh in the KBO and are eight games behind the Kia Tigers.

Meanwhile, the Heroes, with a sweep of the weekend series, are now only one game away from the SK Wyverns and are on a three-game winning streak. Lee Jung-hoo led the team to a win with two hits and three runs on Sunday.

In Suwon, the Hanwha Eagles also swept their weekend series against the KT Wiz, concluding the Sunday game with a 13-5 victory. This is the first time in 378 days that the Eagles have won all three of its weekend games. Wilin Rosario, the Eagles’ infielder, shined the most as he hit a total of eight home runs in three games.

The Wiz is in a four-game losing steak and has lost eight of its home games, now barely maintaining second-to-last position ahead of the Samsung Lions, who concluded their weekend with a 7-5 victory over the Wyverns. Since the first week of April, the Lions have hit the bottom of the league, only winning four out of 26 games, but now, they are slowly making their way back.

The Kia Tigers has extended its lead back to 1.5 games, winning one game of its weekend series against the LG Twins. 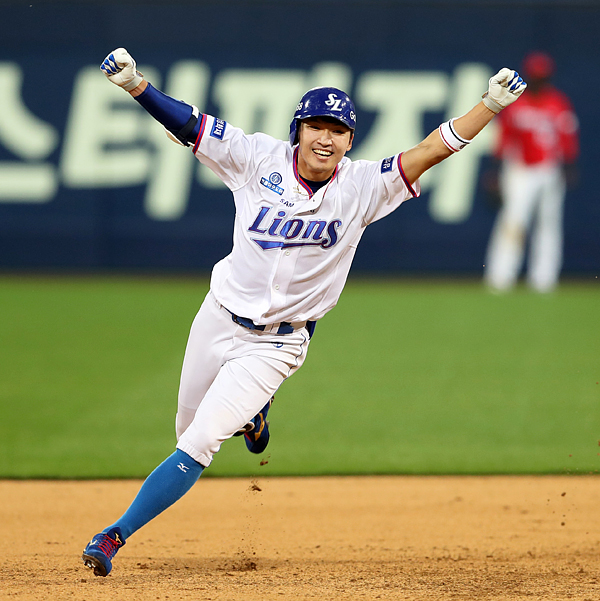 “Lambormini” is what the Samsung Lions fans call Park Hae-min, due to his speed getting on base. Park doesn’t mind the nickname and even has it embroidered on his glove and protective gear.

Park wasn’t recognized in the KBO from the start. After graduating from Shinil High School in 2008, Park made his first attempt at joining the KBO but didn’t get drafted by any team.

Following this, Park attended Hanyang University. Then, in 2012, Park joined the Lions as an undrafted free agent. It wasn’t until the 2014 season where Park made himself known in the KBO, winning the Rookie of the year award.

Park continued his success becoming the KBO’s base-stealing king in 2015, at a total of 60, and in 2016, at a total of 52. This season, he is ranked first in the category, at 20, and is well on track to defending his title for the third consecutive year.

From the start of the season to the month of May, Park’s base stealing percentage was only at 0.303. However, starting in June, it jumped to 0.426. The Lions are also on the rise this month, having won nine of their 16 games.

Park is showing outstanding defensive skill as an infielder. Up until college, Park didn’t spend much time working on his defense, but he is now rated as one of the best infielders in the KBO.

There are certain hits that seems difficult for infielders to catch, but when Park is out there, he makes the difficult catches seem easy.

With both Park and the Lions on the rise this month, they will be playing in a three-game series against the LG Twins at Jamsil Baseball Stadium today starting at 6:30 p.m.