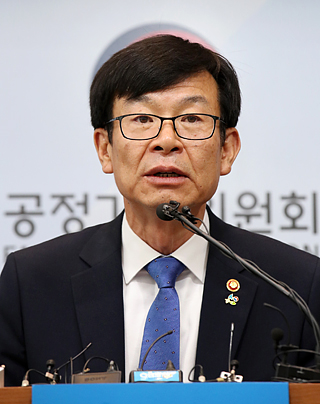 Kim, an economics professor who has long been critical of Korea’s powerful conglomerates, said the government’s partners in reforms are the conglomerates themselves.

“I will try to set up a meeting as early as possible,” Kim said at a press conference at the FTC’s headquarters at the Sejong Government Complex. “I will explain to them that the law will be strictly executed.”

The Korea Chamber of Commerce and Industry, the largest business organization in the country, will arrange the meeting with representatives of the four biggest conglomerates: Samsung, Hyundai Motor, SK and LG. Who will show up was not known.

The FTC official said the meetings will be as early as this week.

“I don’t plan to reform conglomerates by rushing it,” Kim said. “But I will tell them that I hope they make efforts to change themselves according to the market’s expectations. Korean conglomerates are very precious assets to the country’s economy and such assets need to be developed further to create a new future.

“I believe the approach we are making will help the reform become sustainable and irreversible.”

Kim did not disclose any further details about his chaebol reform plans, but confirmed he would heavily monitor the country’s top 10 conglomerates and place even more scrutiny on the top four.

He said Korea still has a long way to go to get to a free market system.

“Korea’s domestic economy is quite small and major sectors become saturated after two or three conglomerates enter a business,” said Kim. “This is why we only have two or three major companies for each major industry, and smaller companies who supply products to them have not many options [but to go along with their wishes].”

He argued that bigger companies take advantage of the situation when negotiating deals.

The FTC is reviewing internal transactions records submitted by 45 conglomerates in March and will take appropriate measures if it spots unlawful activities.

Kim also announced some of his mid- and long-term goals while serving as head of the FTC. He said he will cooperate closely with the National Assembly to revise laws for fairer business activities.

He mentioned the recent decision by BBQ Chicken, Korea’s biggest chicken restaurant chain, to cancel its plans to raise prices over the weekend.

“Some media outlets reported it was due to the ‘Kim Sang-jo effect,’ but the FTC doesn’t have power to intervene in companies’ decisions on setting prices unless they are fixing prices or abusing their authority,” Kim said. “The FTC is not an institution that deals with inflation and I clearly say that we will not intervene in the market in such ways.”