Finding home outside the concrete jungle

Finding home outside the concrete jungle

On clear weekends, Yoo Seung-ki, a 42-year-old resident of the Seoul suburbs, enjoys lounging on his backyard porch swing with a glass of iced Americano while his three kids run in and out of the family’s two-story house, stopping at times to jump on a trampoline set up in the backyard, as their 2-year-old golden retriever watches on from his pen, barking to join the fun.

The chaotic scene is one that the family has enjoyed for nearly two years since they moved out of their apartment in a satellite city of Seoul and into a house in Yongin, Gyeonggi, that Yoo paid to build himself.

Having grown up in a typical Seoul suburb, where concrete apartment buildings pierce the landscape like dominoes, Yoo never experienced living in a home with a backyard. But over time, he developed an interest in life closer to nature and free from the stresses of urban life, especially for his three children, the oldest of whom is 7 and youngest 2. He didn’t want to worry about having arguments with neighbors about noise and didn’t want to force his kids into rounds of private tutoring as many Seoul parents are wont to do. 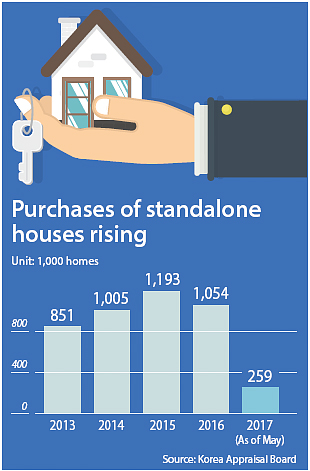 In recent years, many people like Yoo are opting to build their own houses instead of buying apartments built by big developers, mostly because of skyrocketing property prices in the Seoul metropolitan area. The amount of space per won continues to shrink while the cost of jeonse, a type of long-term rental contract common in Korea, continues to climb.

Another reason for the increased interest in single-family houses: more parents like Yoo, who are just starting families, want to live in more relaxed environments that can provide them and their kids with healthier community relationships.

Park Chun-sik, a 41 year-old computer programmer, built his own house a couple of years ago near Seoul because apartment prices were too high.

“It cost at least 600 million won [$530,000] to buy an apartment that was slightly larger than 66 square meters [710 square feet],” Park said. “But it turns out a house the size of 198 square meters costs almost the same, so I decided to look around for potential sites to build my own house.”

Park, who lived in an apartment in Bundang, Gyeonggi, on a jeonse contract, said the cost of moving was another reason he decided to build his own house. Jeonse contracts typically last two years, and every time tenants move to another jeonse apartment, they have to put down a large deposit that can go up to several hundred million won.

“The expense was about the same as taking out a mortgage,” Park said. “So in the end, it was clear it would be much better to take out a loan from a bank and build a permanent house that won’t force my family to move every two years.”

He admits there are disadvantages, namely lack of public transportation and a long commute. Access to places like restaurants, movie theaters and schools is not the same as when living in the city.

Nonetheless, Park feels happier. Not many of his jeonse-dwelling peers can say they have a home that is truly theirs. He also likes that his community is small and tight-knit - there are only 40 houses in his neighborhood compared to hundreds of apartments in a building.

Houses like the one Park owns, which are typically clustered in cul-de-sacs, are gaining popularity in a country that has long placed a premium on high-rise apartments. According to the Korea Appraisal Board, the number of standalone houses purchased in the last three years has exceeded a million every year. That’s a significant jump from 800,000 sold through 2013.

This rising demand for single-family houses coincides with continuously rising apartment prices. Although there have been some points in recent years where the real estate market was frozen because of uncertainties, since late 2013, apartment and jeonse prices have continued to rise despite government efforts to pour icy water on the overheated market. In recent months, prices have soared to record levels on increased buying. The average price of an apartment sold in Korea has risen 9.6 percent to 285 million won from 260 million won two years ago.

The situation in Seoul has been much more devastating: the average apartment price has risen 11.76 percent during the same period to 570 million won. It stands in contrast to market analyses that suggest the bubble will soon burst and real estate prices will fall.

“Roughly 60 percent of housing in Korea is apartments, and because of that, there are people who want a house that meets their own style and preference that can’t be found in apartments,” said Ham Young-jin, a senior researcher at the real estate information provider Budongsan 114.

Major construction companies are cashing in on the trend, promoting projects with geographical proximity to the nation’s capital and management services comparable to those provided at apartments but with the added privacy of a unit home. And instead of having residents seek out their own designers and builders like Yoo and Park did, construction companies are going to the buyer with already fashioned projects.

In February GS Engineering and Construction sold 525 houses in its Xi The Village in Gimpo, Gyeonggi. There were over 17,000 interested buyers, making the bid ratio 33 to 1. The homes were especially popular among young families: 34 percent of bidders were in their 40s, 33 percent in their 30s.

That same month, Park Hime Avenue, a cluster of houses in Pangyo, Gyeonggi, managed to sell out in just two days. The developer was planning to put its 49 homes up for sale for four days.

These projects are filling a void in the standalone home market. For years, interested proprietors have had to deal with the headache of selecting designers and contractors on their own, sometimes leading to unholy partnerships.

Lee Won-hyo, a 36-year-old homeowner who works as a firefighter, said it cost him more than what he initially planned to build his house because he met the wrong designer and builders.

“It took me seven months more than the couple of months in the initial plan and cost me over 550 million won,” Lee said. “There’s a saying that if you select the wrong builder, you age 10 years, and that was my case.”

Lee said he found a builder that was well-known among those making wooden houses and chose someone who could build a home that was sturdy and provide post-construction service if any problems arose afterward. But the construction process didn’t go the way he wanted.

“Unless it’s a major construction company, I don’t think there are a lot of people who have the expertise to build a strong house,” Lee said. “My wife and daughter seem to like it, but I wish I could rebuild it.”