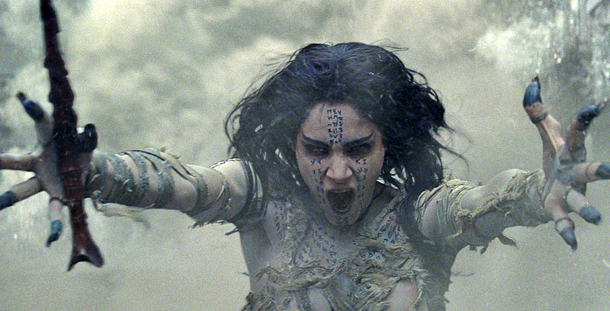 Universal’s first movie under the Dark Universe banner sold 498,000 tickets from Friday to Sunday, adding to a total of 3.24 million since it hit theaters two weeks ago.

The reboot of the classic monster movie, starring Tom Cruise as a treasure-hunting American soldier and Sofia Boutella as ancient princess Ahmanet, accounted for 30.1 percent of the entire weekend’s ticket sales, which is a huge drop from last weekend’s 51.8 percent.

“The Mummy” is Universal’s second attempt to get this particular universe up and running after the 2014’s “Dracula Untold,” which was intended to launch the Dark Universe but was shelved after the movie flopped.

Local thriller “A Day” debuted in close second with 480,000 tickets sold, taking up 28.4 percent of the entire weekend sales.

Directed by Cho Sun-ho and starring Kim Myung-min and Byun Yo-han, the film is a time-loop thriller revolving around Jun-yeong (Kim) and Min-cheol (Byun), both of whom continue to return to a specific time to witness the death of their loved ones.

Filmmaker Jeong Byeong-gil’s female-centered action movie, “The Villainess,” which bowed in Cannes Film Festival last month, landed at third with 247,000 tickets in its second weekend. The action-packed movie, starring Kim Ok-bin as a trained assassin, has so far sold a total of 927,000 admissions. DC Comics’ latest superhero film “Wonder Woman,” starring Gal Gadot, slid down a spot to fourth in its third weekend with 128,000 tickets sold, adding up to an accumulated sale of 2.08 million.

“Our President,” a documentary about late liberal President Roh Moo-hyun, rounded out the top five in its fourth week with 84,000 admissions sold, adding up to a total of 1.72 million.