‘Cats’ is back, with a few new twists : New cast members visited Seoul’s feline cafes to ready for roles

‘Cats’ is back, with a few new twists : New cast members visited Seoul’s feline cafes to ready for roles 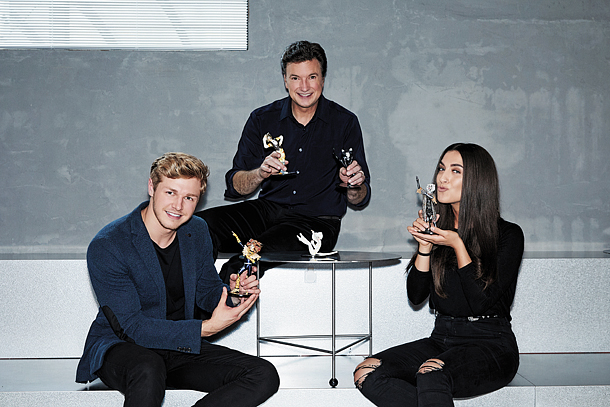 Actors in the upcoming production of “Cats” with action figures of their characters. From left, Will Richardson who plays Rum Tum Tugger, Brad Little who plays Old Deuteronomy and Laura Emmitt plays Grizabella. [CLIP SERVICE]

There is only a handful of musicals loved by audiences across the globe and across generations. Andrew Lloyd Webber’s “Cats,” based on T.S. Eliot’s whimsical poems about feline psychology and sociology is one of them.

Since premiering in 1981 in London’s West End, it has been seen by more than 73 million people, still being staged across the globe in more than 20 languages. In 2003, the international touring company brought the production to Korea and danced into the hearts of musical goers here with the charm of cats. Since then, it’s been here six more times and twice with a Korean cast, creating a community of “Cats” fans who have seen the musical more than 100 times.

The English touring production of “Cats” is coming to Korea once again, after three years with a new cast and some touch-ups. According to Clip Service, the Korean production company that is bringing the upcoming “Cats,” the makeup and costumes of some of the cats have changed as well as the choreography. The production kicks off on July 11 at the Haeoreum Theater of the National Theater of Korea in central Seoul.

“People who have seen the show over 100 times will really see the difference,” said Brad Little who will play Old Deuteronomy, the wise leader of the Jellicle Cats in the coming production. “People who have seen the show once or twice may feel like they are seeing the same show, but it’s the megamusical fans of ‘Cats,’ which we know there are many, that will definitely be able to pick out differences. They would probably pick out more differences than we actors can.”

It’s hard to go wrong with cats but what is the real charm behind this feline musical?

The performers say that the musical is not just about impressing the audience by mimicking cats with realistic feline movements or how beautifully Grizabella can sing the famous number “Memory.”

“It’s not a mere show musical that only shows how a cat acts,” said Laura Emmitt who will play the glamorous cat Grizabella. “The musical is taught through poetry so even without necessarily understanding the language, the story and the characters’ intent is transcended. When you watch it the first time, you get the show at face value. When you watch it the second and third time you kind of notice that all the cats are different and the more you watch it the more you get to know the cats and realize that every cat in the show has its own story, its own personality and its own intention. The real charm is that each cat has its own story to tell.”

To hear more about the latest version of “Cats” that is coming to Korea, the Korea JoongAng Daily sat down with Little, Emmitt and Will Richardson who will be playing Rum Tum Tugger, the perverse and mischievous cat. Here are some edited excerpts from the interview. 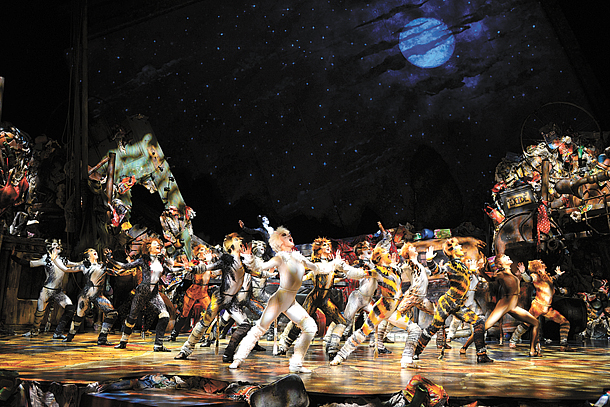 A scene from the musical “Cats” by one of the international tour productions. [CLIP SERVICE]

Q. Richardson has played the character before but the production is new for Emmitt and Little. How is it playing a cat in a musical?

Emmitt: It is very refreshing and challenging as it requires skills that other musicals don’t necessarily require.

Little: We play animals when we are children and it’s kind of funny that we are doing it now as adults, yet kind of in a bizarre way. The major difference is that, as an adult, we do more research on how a cat behaves and moves which you wouldn’t do as a child.

Richardson: I would definitely agree with Laura saying how challenging it is. But as Brad said, there’s a lot of similarities between humans and animals - animal instincts and how they react to different things especially. I would also say it’s been really fun, being able to do something completely different, especially with my character.

How do you research how to act like a cat?

Emmitt: We were given a lot of resources actually, a lot of information about the behavior and anatomy of a domestic cat. I watched a lot of videos on YouTube. It was a case of losing your inhibitions, as well.

Richardson: We also spend the initial week of rehearsals just practicing and learning how we can transfer the way a cat moves into our bodies. We did a lot of workshopping and just playing in the room, touching each other and doing things that cats would do but as humans and just exploring that.

Little: I’ve had cats almost my whole life except the last two or three years. So I’ve always had a cat in my house and it’s kind of funny how I do think back the behaviors on how my cat would annoy me and what he would do to annoy me. There are certain movements of cats that dogs don’t have but one thing a cat has is attitude. Those are the fun things to experience and experiment with as actors. A cat has so many different colors and as an actor that’s a lot of fun to explore.

Richardson: I think some people in the cast also went to cat cafes in Seoul. They were obsessed with trying to find cats here so they finally found a cat cafe here and went there just to observe.

All of you have played other popular leading roles in other musicals. Why did you want to audition for “Cats,” which I believe is a musical without leading roles?

Emmitt: It’s such an iconic show and it’s something we’ve grown up with. It’s a classic theater piece that it’s almost like performing in a part of musical history.

Little: I’ve been [in this field] longer than “Cats” but “Cats” has been like the one megamusical that alluded me. When I knew that it was coming back to Korea, I went to the production company in Korea and said I would love to do this if you are interested. I had auditions as well by sending video files to London for Andrew Lloyd Webber’s company to see. After all these years, I’m finally going to be putting “Cats” on my resume.

The upcoming show is drawing more attention here as the production company said this is a new version of “Cats” that Koreans aren’t familiar with. What are the major changes?

Richardson: The main difference is that the production company is taking everything from its most recent and freshest version of the show, which comes from the London version and also the international tour that’s currently touring now. The show has been constantly updated over the years as the show progresses. And we are doing the most current, original version of the show.

Emmitt: My character has been redesigned since it has been played by Nicole Scherzinger from the “Pussy Cat Dolls.” She played the role in London and obviously since then Grizabella became young and completely different to the usual typecast of Grizabella. Once they had her, they redesigned the character in a sense that she’s no longer old. We were told to imagine an Amy Winehouse type character, someone who is so swept up in glamour and the rock ’n’ roll lifestyle and fame and glory just destroys them.

The number “Memory” is especially loved by Korean musical fans. So many divas have sung it and you can’t be free from being compared. Do you feel any pressure to sing it?

Emmitt: I believe it’s about making it your own. There’s a specific story line, especially at the end of Act 2, there’s very specific thought process throughout the song. I actually rehearsed for the first time yesterday and it was a real emotional journey. I hope that that comes across as well as the sound. I want it to be able to really tell the story of her journey and her desperation by that point in the show.

Richardson: I think that’s something to do with the whole show. Certainly you have to learn and do certain vocals and choreography but in this show, a lot of it comes from the simple storytelling background and everything starts with us talking about the story and where it comes from inside as an actor as an emotion. I think that’s what really attracts people to this musical. Everything is thought driven and emotion driven which makes the show so brilliant. It’s not just vocally great it’s also a beautiful story that hopefully they would be able to understand.

So the attraction behind the musical “Cats” is not how realistically you portray cats or how well Grizabella sings “Memory” but are you saying that it’s the story behind each cat?

Little: We are being trained and we are being told and taught a lot about improvisation and a lot about not doing the same thing every single night. I think it’s one of the things that people love about the show. It’s up to us to make it real and different every single night. There’s real within a structure and there’s real within your imagination. And there’s so much that we are allowed to do within our imagination, and it’s encouraged by the creative team, which is in a way kind of unheard of in most musicals.

Emmitt: Yes. It’s really refreshing as an actor to get that freedom.

Little: When doing a lot of musicals here, especially English-language musicals, they have subtitles. For most of the times I find it distracting especially for the audience and that it loses something with an audience. But with this particular show, it’s the opposite. The words we sing in English are poetry and sometimes it is difficult to find out what T.S. Eliot means just by listening to the lyrics. But the beautiful thing is that all Koreans will have a true understanding of the show much more than if we were doing it for English-speaking people without subtitles. I think you can only catch maybe 10 to 20 percent of what Eliot is trying to say when you are listening to it as an audience without reading the subtitles. When I started learning these lines, and when I started reading the lines of other characters and studying it, I had a whole different appreciation for this show.