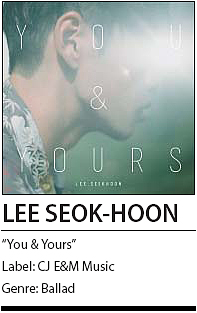 Lee Seok-hoon, a member of the vocal trio SG Wannabe which enjoyed huge popularity in the mid-2000s, intends to stand on his own through this solo EP effort.

Ever since the group returned from a four-year hiatus in 2015 with their album “The Voice,” Lee has been keeping himself busy. He’s gotten married and featured as a vocal trainer on the K-pop audition program “Produce 101,” which recently concluded its second season.

In between his activities, Lee has been able to find time to get back in the studio and capitalize on his newfound fame. He has gained a cult following through his snarky remarks about contestants on “Produce 101.”

The slow ballad genre, Lee’s specialty, is something of a dying genre in this K-pop-laden world, but Lee keeps true to his roots through this six-track album that includes two instrumental pieces.

The main track “She” keeps to the theme of the album. It is a slow serenade dedicated to his loved one, a recurring motif in this short but pleasant album.