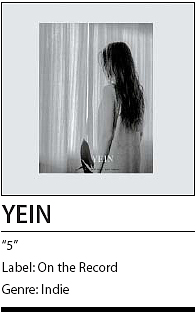 For those tired of the loud EDM sounds that typically rule the summer music charts, the debut album from singer-songwriter Yein offers a chill vibe and mellow respite. Her light and airy voice carries the album’s five songs, which she wrote and composed herself.

The album has a tropical feel, given her time spent living in Hawaii. The genre is more difficult to pin down. Yein herself has labeled it “future classic,” a combination of psychedelic sound and dream pop.

With Yein’s voice softened to a whisper, the main track, “Rose of Sharon,” sounds like a peaceful lullaby. The lyrics are the stuff of poems, with lines like, “I am a rose of Sharon, a lily of the valleys.” Ever the skillful vocalist, Yein manages to make even her breath sound like part of the composition.

Yein sings some of her songs in English, including “Breath,” an infectious bit about eternal love, and “Surround,” a serenade with sweet lyrics like “Your lips just speak a milk and honey, and I become like a flower.”