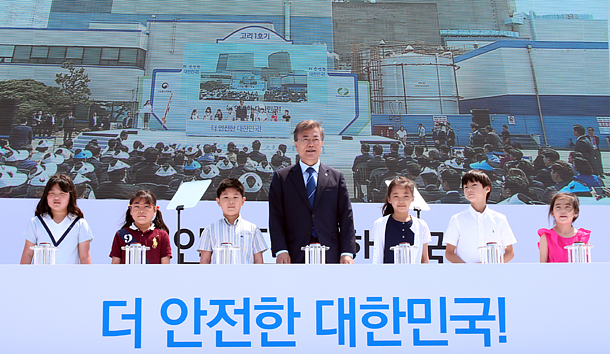 “The nuclear-centered energy policy will be abolished and Korea will move toward a nuclear-free era,” he said. “All construction plans for new plants under preparation will be scrapped. The lifespans of existing plants will not be extended.”

The Kori-1 began commercial operation in 1978. The plant was originally designed to run for 30 years, but the government decided in December 2007 to extend its operation for another decade. Decommissioning the plant was decided in 2015 and Moon, who promoted a nuclear-free energy future for Korea during his campaign, attended the ceremony to commemorate the event.

As a part of a nuclear-energy-free roadmap, the Wolseong-1 reactor, which is still in operation after an extension of its lifespan, will be shut down as soon as possible, Moon said, taking into account the power supply situation. He compared running nuclear reactors beyond their originally planned lifespans to the Sewol ferry disaster. The ferry, operated after an extension of its lifespan, sank in 2014, killing more than 300 passengers.