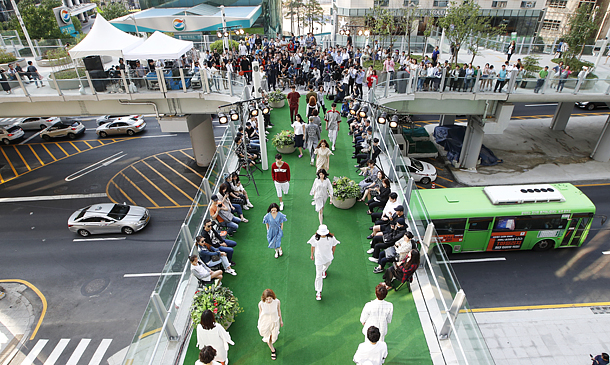 More than 2 million people have visited the Seoullo 7017 overpass in central Seoul as of Monday, and the Seoul city government is hoping to draw as many as 10 million visitors by the end of the year.

“Despite some troubleshooting concerning a lack of shade, and some controversies concerning its design, a total of 2.03 million people have visited as of Monday, just a month into its opening,” the Seoul Metropolitan Government said in a statement. “We hope to see as many as 10 million visitors by the end of the year, which would be more than the annual number of visitors to the High Line park in New York.”

Seoul Mayor Park Won-soon had told the press that he first got the idea of turning the overpass highway above the Seoul Station into a 1.7 kilometer (1 mile) pedestrian park after seeing the High Line.

The overpass highway, originally built in 1970, was reopened to the public as a pedestrian park on May 20 after about a year and a half of renovation that cost 59.7 billion won ($52.7 million). It drew a total of 255,400 people in the first two days.

“The most popular spots for kids on the park are the [fenced-in] trampolines, where kids can jump high up and see the whole of central Seoul,” said the city government. “The little foot baths are also popular, especially during warmer weather. We change the water every 2 to 3 hours.”

The city government has also been running free events on the park.

“We’ve installed hammocks under tents for passersby to rest during their lunch hours, tables where passersby can join in a board game with strangers, talks given by travel writers and makeshift libraries with travel books,” said the Seoul Metropolitan Government. “They’re all free and they’ve been quite popular among office workers who visit the park during lunch breaks.”

The number of visitors was about 53,000 per day this past week.

“With the changing seasons, we expect the number of visitors to drop dramatically after November,” the city government said. “But at this rate, if we say that an average of some 1.6 million people visit per month until October, then it’s likely the accumulated number of visitors will surpass 10 million by end of December.”

The Seoullo 7017 overpass park most recently made headlines over an art installation made up of a cascade of used shoes flowing from the side of the park onto the road below. The work, described in articles and social media as “monstrous” or “hideous,” was on display from May 20 to 29.

“Feedback from visitors also focused on the lack of shade,” said the city government. “There are 10 tent-like structures in the park to provide shade, but visitors have told us they are not enough. We will be installing 15 additional tents. We will also install some 20 mobile benches on the park, as there have been complaints over a lack of resting areas.”