Karate faces off against taekwondo in Olympics

Karate faces off against taekwondo in Olympics 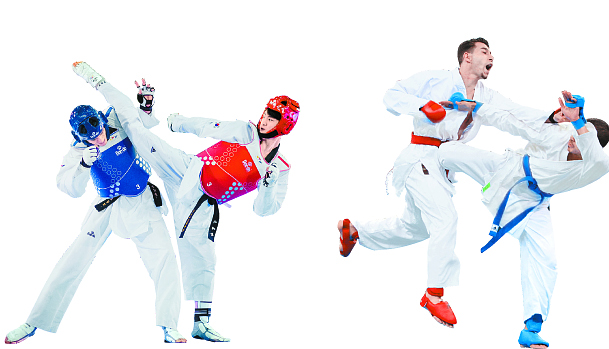 Baseball/softball, karate, skateboarding, climbing and surfing will be added to the Olympics, the International Olympic Committee (IOC) decided in Lusanne, Switzerland, on June 9.

As a result, taekwondo and karate will both appear at the 2020 Tokyo Olympics.

Now that karate will be played at the Olympics alongside taekwondo, Japan is working hard to leave a strong impression at the 2020 Tokyo Olympics, with plans to host the matches at Nippon Budokan - where only Japan’s representative sports, like sumo or judo, are played.

Since the possible venues for the 2024 Olympics, Paris or Los Angeles, have high rates of people participating in karate, karate associates are expecting the sports to be retained until the 2024 Olympics. Though taekwondo is still considered a core Olympic sport, there is the possibility of one of the two being eliminated in the near future.

“The two sports use kicks and punches, but we have differentiated the characteristics as taekwondo favors more kicks and karate uses more punches,” said Yang Jin-bang, chairman of the World Taekwondo Federation (WTF).

Prior to the recent addition of karate, the two competed for an Olympics spot in 1970. At the time, karate was more known and had more people worldwide participating in it but the WTF ultimately won as the different karate associations couldn’t come together and the sport suffered serious internal conflict.

Taekwondo thus made its appearance as a demonstration sport at the 1988 Seoul Olympics and finally became a full medal sport at the 2000 Sydney Olympics. After, they introduced a video system to reduce judgment error and are continuing to make the sport more interesting by adjusting the rules to encourage players to use more techniques.

During the 2016 Rio Olympics, taekwondo was one of the more popular sports on television, having up to 390 million viewers. Even Thomas Bach, the president of the IOC, visited the stadium to watch the contest at the Rio Olympics for almost an hour and thanked the associates for developing taekwondo to the level of an Olympics sport.

“The occupancy rate of seats at the 2012 London Olympics was 99.8 percent,” said Choue Chungwon, president of WTF, “and last year, it was still high at 93 percent.”

Rather than having a direct competition against karate, taekwondo will undergo some changes to differentiate itself. The WTF is considering improving the design of its protective gear, distributing more colored uniforms and improving the lighting and sound effects.

They have also improved the regulation of the game to promote the use of more attacks. Rather than a point being given for a basic attack on the body, fighters will now be given two points. If no attacks are made, rather than a warning, points will now be deducted.

Also, if a player lifts their front leg for more than three seconds to block an opponent’s attack, they will be given another deduction.

The new regulations will be presented for the first time at the 2017 WTF World Taekwondo Championships in Muju, starting from June 24, which is expected to be the largest taekwondo competition in the world.

“The style of the sport will be more aggressive and the average scoring has increased to 20 points,” Yang said. “And we are expecting to add more categories in taekwondo like a mixed team event and poomsae [forms] to expand participation.”