Allies can disagree on details

Allies can disagree on details 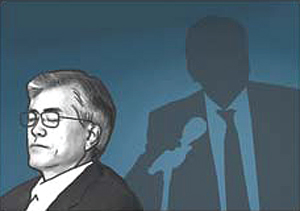 Regardless of the intentions, an aide to the president should not come under too much media spotlight. First of all it does not look good for the president. Secondly, it can cause confusion in policymaking. Moon Chung-in, presidential special advisor on unification, diplomacy and security, has become a headline because of his comments made at a seminar at the Woodrow Wilson International Center in Washington D.C. on Friday.

He said Seoul could discuss with Washington about cutting back U.S. strategic assets around the Korean Peninsula and joint military exercises if North Korea suspends nuclear and missile activities. He said Seoul needs not synchronize with Washington in terms of renewing dialogue with Pyongyang. He dismissed views that the Korea-U.S. alliance could be hurt from Seoul’s decision to put off full deployment of the Terminal High Altitude Area Defense (Thaad) system for an environmental assessment. “If the Korea-U.S. alliance is ruptured by the issue,” he said, “that’s not an alliance.” What he said was quite explosive.

Moon told reporters he was speaking as a scholar, not as a presidential adviser, but controversy was unavoidable. Moon has been tutoring the president on foreign and security affairs. His comments could be interpreted as the views of the president. A special adviser’s role is to mentor the president behind the scenes. It is best that he keeps a low profit and speaks with great discretion. The more he talks, the more he may make slips of the tongue. Especially at seminars deeply within the Washington beltway.

The Blue House tried to distance itself, saying Moon was expressing his own personal opinions. But the damage was done. The Blue House can only be unhappy about such noise ahead of the first summit with the U.S. Skepticism is already building in Washington about the new administration. Conservatives in the opposition camp cannot be happier about such a blunder by the immensely popular administration. The Blue House and its special adviser are both in the hot seat. The Blue House is being pressured to sack the adviser for causing a “diplomatic disaster” and undermining the alliance.

What Moon said is hardly surprising as it is consistent with his views as a scholar. He has made the same argument repeatedly in columns in the JoongAng Ilbo. There are many who side with Moon’s views in Korea and the U.S. alike Frankly, I agree with Moon’s views. But expressing them as a civilian expert is different from when you’re a presidential adviser sent to Washington D.C.

Diplomatic views can differ among the closest allies. It would not make sense for Korea and the U.S. to hold the same approach to solve the North Korea nuclear problem and a sensitive issue like the Thaad deployment. If there is a disagreement, allies can talk it over. There is no need to raise a hoopla because we may have upset the U.S. Although we rely heavily on the U.S. for security, a sovereign state can have a different voice. Washington would not respect us if we did not freely speak our mind.

From what I understand, Moon stressed that there was no fundamental disagreement between Seoul and Washington about so-called “maximum pressure and engagement” to solve the North Korean nuclear problem. While Washington is more intent on using sticks, the Moon Jae-in government wants to include dialogue. If our relationship with North Korea entirely hinges on the relationship between the U.S. and North Korea, we are giving up our stake in our own land. Instead of synchronized action, we must divide the role for a more productive effect.

Sanctions alone cannot solve the North Korean nuclear problem as we have learned over the nine years of the governments of Lee Myung-bak and Park Geun-hye. We need an entirely new approach. We need a breakthrough. Skeptics oppose returning to the engagement policy of liberal presidents Kim Dae-jung and Roh Moo-hyun. But we cannot sit on our hands any longer. The proposal of scaling back military exercise and U.S. strategic assets may have been proposed from such an anxiety. If some of the demands from North Korea are met and North Korea in return suspends its nuclear and missile programs, we can move closer to irreversible and complete denuclearization. The Thaad deployment also should proceed under the legal processes of a sovereign state.

Reading the transcript of the press conference, adviser Moon appeared to have lost patience toward the end. He turned emotional when correspondents in Washington repeatedly challenged views that seemed to disagree with the current U.S. administration.

The press conference shed some light on the fundamental thoughts of President Moon Jae-in on North Korean issue. But more harm had been done than good. The special adviser would been better off using his excellent English for one-on-one discussions with U.S. policymakers.