The best form of education

The best form of education 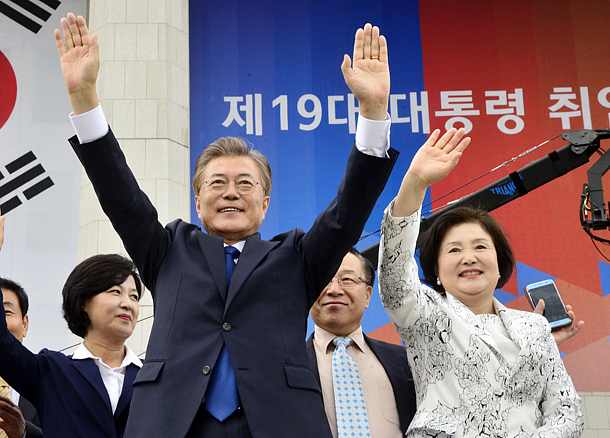 President Moon Jae-in and first lady Kim Jung-sook wave to the crowds after Moon took the oath of office at the National Assembly on May 10. [YONHAP]

Among President Moon Jae-in’s predecessors, only one has as little international experience as himself.

Rhee Syng-man was educated in the United States. Park Chung-hee was a graduate of a Japanese military academy. Chun Doo-hwan and Roh Tae-woo were trained in the United States in guerilla tactics and psychological warfare. Kim Young-sam and Kim Dae-jung became members of the National Assembly in their 20s and 30s, and Lee Myung-bak was a businessman. So they had many chances to travel abroad on business. Park Geun-hye briefly studied in France.

The exception is Roh Moo-hyun, whom Moon admires. Roh had been abroad three times before being elected, but he had never been to the United States. During the election campaign, his opponents attacked him for lacking overseas experience.
Roh responded, “There was no reason to go abroad other than sightseeing, creating support groups in overseas Korean communities and taking photos with American officials, and I am not into any of those.” The mention of taking photos with U.S. officials became controversial.

How about Moon? Partly because of Roh’s influence, the only trips abroad he has taken since he went into politics in 2012 was a one-day visit to Japan and last year’s trip to Nepal and Bhutan. A close aide said that Moon has never been to the United States. There had been chances, but they never materialized, he said. But according to the U.S. Embassy, he visited New York to attend his son’s graduation. The Blue House confirmed that Moon did not visit the United States while serving public positions during the Roh Moo-hyun administration. Not even his close aide was informed of the personal trip. During the election campaign, Moon’s overseas experiences did not become an issue.

However, nowadays, college students work part-time to save up for travels. Most people who live comfortably have visited the United States. Most Korean visitors are overwhelmed by skyscrapers, vast plains in the Midwest and signs of abundance.

As Korea needs to survive among the powers, it is hardly a merit for a Korean leader to lack experiential knowledge of the United States. In the United States, leaders’ overseas experiences are cited. For presidential elections, U.S. media research the number of overseas visits of each candidate. Former President George W. Bush was criticized for lacking international experience, as he had only been to Mexico and China, where his father was an ambassador.

Harry Truman was excluded from international affairs even when he had been a vice president, and Ronald Reagan had been an actor. They were not international experts. However, Truman successfully resolved the Suez Canal crisis and Reagan pulled off a reduction in the number of nuclear weapons.

They promoted Dean Acheson and George Shultz, who are considered the best Secretaries of State in history, and entrusted them to lead foreign policy for four and seven years.

In contrast, President Jimmy Carter appointed Cyrus Vance and Edmund Muskie, who are rated the lowest among Secretaries of State. In the end, a leader who does not have much international experiences can succeed by appointing the right figures. Roh is highly rated for his foreign policy by having employed seasoned diplomats like Ban Ki-moon and Song Min-soon.

How about the Moon Jae-in Administration? Moon is focusing on reform, and there are not many professionals who can skillfully handle diplomacy with the United States, China and Japan. Moon’s foreign policy will succeed by promoting seasoned experts in each field.