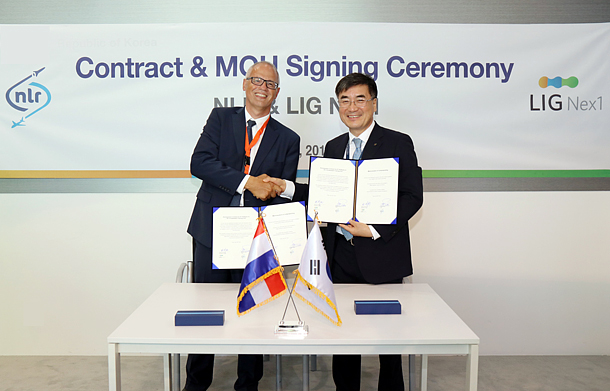 The Korean company said Tuesday that it signed a memorandum of understanding with the Netherlands Aerospace Centre to co-develop an embedded training unit for fighter aircraft at the Paris Airshow 2017, the world’s largest exhibition for aerospace and defense industries.

An embedded training unit is avionics equipment that enables close-to-reality simulation of battle situations and is used to effectively train fighter-jet pilots.

LIG Nex1 expects this partnership could help it stretch business into software development projects for fighter jets in the local market and also develop new portfolios in its avionics business.

Netherlands Aerospace Centre is a leading company in research development test and evaluation business for space and aerospace-related projects and also an international research institute for virtual training systems, according to the LIG affiliate. The center is known to have secured the world’s top technology for the embedded training unit.

“The partnership with Netherlands Aerospace Centre is a good asset for our company,” said Kwon Hee-won, CEO of LIG Nex1. “We will work our way to contribute to the local fighter jet development projects and also find new business opportunities abroad.”

While avionics has been only a small part of LIG Nex1’s business, a spokesperson said the company aims to continue expanding the area in line with the growth of the aerospace business in Korea.

The defense company has relative strengths in developing precision guided munitions such as surface-to-air guided missile and intelligence surveillance systems including radar systems.