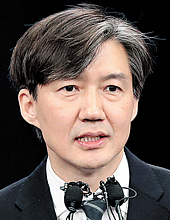 The ruling Democratic Party and the opposition parties clashed on Tuesday over whether to summon Cho Kuk, senior presidential secretary for civil affairs, to the parliamentary committee with the opposition intent on grilling Cho for ministerial appointments that went awry.

The three opposition parties have demanded that Cho, former professor of law at Seoul National University, appear before lawmakers at the parliamentary house steering committee to explain what went wrong in the Blue House’s vetting process for ministerial appointees, namely Ahn Kyong-hwan, who was tapped to become justice minister but became the first ministerial nominee to bow out amid an ethics controversy.

The ruling DP has snubbed the demand, calling it a “politically motivated” attempt to smear the presidential office and the former professor, who was named to reform the prosecutorial body.

The opposition’s criticism of Cho has increased in recent days, as Ahn withdrew himself from consideration on Friday after it was revealed that he had registered a fake marriage in 1975 by forging a woman’s signature.

Questions arose about whether Cho had effectively vetted Ahn before the Blue House announced his appointment as justice minister. In a joint effort to concentrate on Cho, the opposition parties want him at the parliamentary committee where he is expected to be questioned.

Calling in Cho as well as Cho Hyun-ock, senior presidential secretary for personnel management, Liberty Korea Party floor leader Chung Woo-taik, who also serves as head of the steering committee, proposed to open up a committee meeting on early Tuesday, but the proposal was rejected by the ruling DP.

Chung pushed ahead and convened the committee meeting at 2:15 p.m. Tuesday, though it was soon interrupted by DP members who protested that Chung had no right to convene the meeting without the DP’s consent. The ruling party members left the room at 3 p.m.

In an attempt to find common ground, floor leaders of the DP and two opposition parties, the People’s Party and Bareun Party, met at the National Assembly on Tuesday, but without LKP floor leader Chung, who refused to take part.

Emerging from the meeting, People’s Party floor leader Kim Dong-cheol told reporters that the opposition agreed that President Moon Jae-in should issue a “responsible statement,” in other words an apology, regarding recent controversies over his picks for cabinet ministers.

The prospect of bipartisan cooperation appears slim after Moon went ahead with the appointment of Kang Kyung-wha as foreign minister despite the opposition’s strong protests.

The three opposition parties have cited Moon’s campaign promise, in which he named five types of corruption that he will not allow when making appointments for senior posts in his government. Candidates with a record of draft-dodging, real estate speculation, tax evasion, fake address registration or plagiarism would not be selected, Moon said. But Kang was shown to have faked her address in 2000 to send her daughter to the school of her choice.