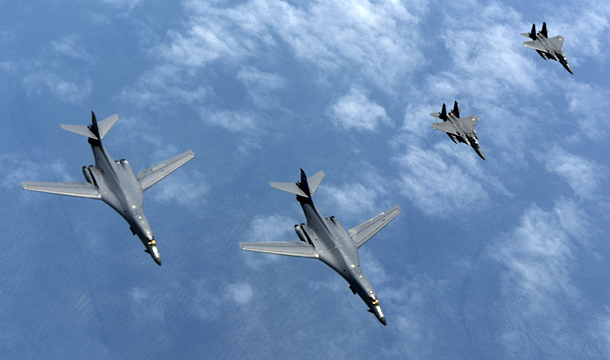 A pair of B-1B Lancer bombers from the U.S. Air Force, left, flies over the Korean Peninsula on Tuesday as a part of a joint military drill with Korea. Two F-15Ks from the Korean Air Force can be seen on the right. [YONHAP]

A special adviser to President Moon Jae-in tried to persuade Washington that his controversial suggestions about new approaches to North Korea weren’t actually from Korea’s president.

Moon Chung-in, presidential special adviser for unification, foreign and national security affairs, attended a discussion hosted Monday by the Asia Society in New York, international media reported. At the event, he stressed that President Moon’s North Korea policy is in line with the Donald Trump administration’s strategy of “maximum pressure and engagement.”

“Look, the South Korean government has been complying with the international sanctions regime,” Moon was quoted as saying by the Voice of America. “We have been fully complying with United Nation’s resolution 2270, 2321 and we closed the Kaesong Industrial complex, we closed Mt. Kumgang tourism project. Therefore, at the present moment, we are part of that maximum pressure on North Korea.”

He stressed that President Moon is fully aware that current conditions are not proper for restarting inter-Korean dialogues. He tried to distance himself from the official decision-making process of the administration in Seoul. He said he is just an adviser to the president, and it is up to the president whether to listen to his advice or not.

Moon, a professor at Yonsei University, stirred controversy last Friday with remarks at a forum on the U.S.-Korea alliance at the Woodrow Wilson Center in Washington, D.C.

If North Korea suspends nuclear and missile activities, he said, South Korea could consult with the United States to scale down joint military exercises and reduce deployment of U.S. strategic weapons to the South.

He also dismissed concerns that an environmental probe ordered by Seoul will effectively delay the U.S. deployment of the Terminal High Altitude Area Defense antimissile system in Korea. “If the Korea-U.S. alliance is ruptured by the issue,” he said, “that’s not an alliance.”

His remarks prompted angry responses in Washington. To distance itself, the Blue House issued a warning to him on Monday in Seoul.

On Monday in New York, Moon stood by his Friday remarks, but claimed they were his personal views as a scholar. He stressed that although he is a special adviser, he has no policy-making authority.

Moon elaborated on his idea of scaling down Korea-U.S. joint military exercises. He said it means reducing strategic assets deployed by the United States since the North’s sinking of the South Korean warship Cheonan and shelling of Yeonpyeong Island in 2010.

He said Seoul and Washington could make an offer of those gestures to Pyongyang in return for denuclearization, adding that a give-and-take is the essence of a negotiation.

Moon also said Moon-Trump summit next week will be an opportunity for the two leaders to ease tensions between Seoul and Washington. Moon will visit Washington for the summit.

In an obvious riposte to the special adviser’s remarks, the U.S. military publicized the dispatching of strategic bombers to South Korea on Tuesday. Two supersonic B-1B Lancer bombers were dispatched to participate in a joint drill with the South Korean Air Force, a Korean official said.

“Today’s dispatch was based on the joint exercise plan created earlier this month,” a military official was quoted as saying by Yonhap News Agency. “The United States will send the strategic bombers more than once a month and it will not scale down an exercise plan for this year.”

General Vincent Brooks, commander of United States Forces Korea, ordered the military to actively promote the strategic bombers’ participation in the drill, a military source also said. Until recently, the United States has not made public its dispatch of strategic assets. The bombers were sent twice last month, but no media coverage was allowed.