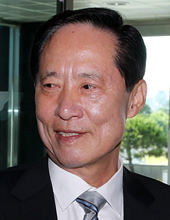 Despite President Moon Jae-in’s promise of defense reform, including a plan to end corrupt ties between the military and defense industry, his nominee to head the Ministry of National Defense has maintained close relationships with the arms industry by working as a well-paid consultant, an opposition lawmaker said Monday.

Rep. Kim Hack-yong of the Liberty Korea Party said Song Young-moo, former Navy chief of staff named to become the defense minister earlier this month, is unfit to serve the post because of his ties to the defense industry.

“When he was the head of the Navy’s shipbuilding team in 2002, he visited Hanjin Heavy Industries and Construction, one of the bidders for the procurement project to build the country’s largest transport vessel, Dokdo,” Kim said. “His junior officers tried to stop him, but Song didn’t listen.”

The shipbuilding team was in charge of all projects to build new Navy vessels. Its operation was taken over by the Defense Acquisition Program Administration in 2006.

After retiring from service, Song joined a law firm, Yulchon LLC, in January 2009 as an advisor. According to Kim, Yulchon was the legal representative of Hanjin in about 10 cases. Song worked for two years and nine months and received 412 million won ($362,568).

“Song was hired as an advisor for LIG Nex1, a defense company, in 2012,” Kim said. “Using his network, he is suspected of helping the company to export a ship-to-ship missile to Colombia.”

Song received 240 million won from the company for his two years and six months of service.

“I also have information that Song worked for Daewoo Shipbuilding and Marine Engineering,” Kim said.

“Kim Byung-kwan, nominated to become the first defense minister of the Park Geun-hye administration, failed to be appointed because of his history of working as an advisor of an arms dealer,” Kim said. “Compared to the case, I can’t say Song’s history is not serious. The Moon administration promoted that ending procurement corruption is a task of defense reform. The nomination of Song, therefore, must be withdrawn.”

Song said his visit to Hanjin has nothing to do with the Dokdo project. “I visited major shipbuilding firms including Hanjin after my appointment to head the shipbuilding team in January 2002,” Song said.

“I was also not involved in individual cases while working for Yulchon,” he said. “I educated lawyers who are not familiar with the defense industry.”