Nobel laureate in physics will speak to students in Suncheon

Nobel laureate in physics will speak to students in Suncheon 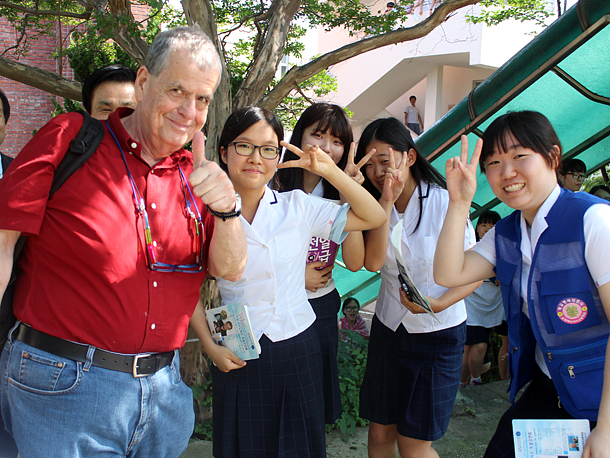 SUNCHEON, South Jeolla - Brown University professor and last year’s Nobel laureate in physics, J. Michael Kosterlitz, will give a special lecture at Suncheon Maesan Girls’ High School on Thursday. The British physicists David J. Thouless, F. Duncan M. Haldane and Kosterlitz were awarded the Nobel Prize for their discovery of the two-dimensional transition from an ordered state at low temperatures to a disordered state at high temperatures.

Kostelritz will elaborate on this discovery and take questions from the audience.

Jang Yong-soon, the school’s principal, has flexed his personal networking skills to invite Nobel laureates to the school in the past, but often over the past three years, those he contacted demanded lecture fees beyond the school’s budget. Kosterlitz, however, has agreed to a modest paycheck.

In achieving this, Jang credits his friend Kim Moon-gil, professor emeritus of Japanese language at Busan University of Foreign Studies, a Dokdo expert, who helped Jang contact the Nobel laureates. Aside from their eight-year friendship, Kim says he was inspired by Jang’s effort to overcome the tyranny of distance Suncheon suffers from being 294 kilometers (183 miles) from Seoul.

Although Jang’s tenure is expected to end in September 2018, the principal says he will continue his efforts at attracting Nobel Prize winners to the school. “People may wonder, ‘What’s the point of a Nobel laureate giving a lecture to high school students?,’” he says. “But the significance lies in the possibility that the lecturer moves someone in the crowd to make important life decisions.”

He adds, “Who knows? Our school might produce a Nobel Prize winner.”