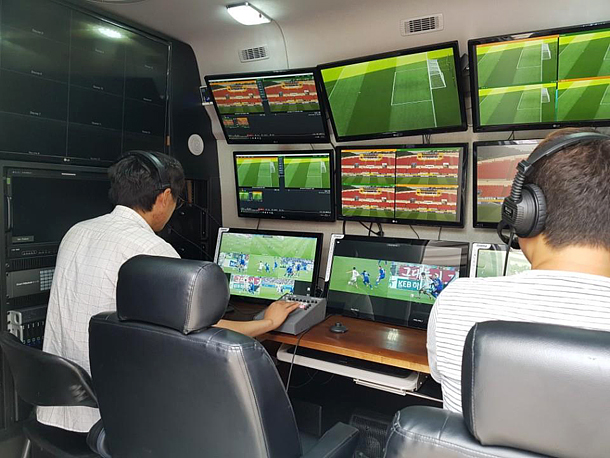 Korea’s pro football league said Monday that a video review system will be implemented next month to reduce refereeing mistakes and enhance the quality of matches.

The K-League, the operator of the pro football competition, said the video assistant referee (VAR) system will be adopted July 1 in its first division K-League Classic after going through a three-month test. The International Football Association Board (IFAB), the Switzerland-based body that determines football rules, approved the K-League’s test of the VAR system this past March.

“We originally wanted to install the VAR system early next year,” said Cho Young-jeung, who heads the K-League referees committee. “But we decided to adopt the system quickly after we saw major incidents early this season.”

Two cases have especially rocked the top-tier K-League Classic so far this season, leading to fines for general managers of Gwangju FC and Incheon United. Fans have also been critical of the league’s poor officiating.

The league said it plans to use the VAR system in the second-tier K-League Challenge next year, but the schedule could change depending on situations there.

“Our referees have prepared hard (for the VAR system) and learned it well,” Cho said. “But we could face some difficulties because unexpected situations do happen.”

The officials said the VAR system at the FIFA U-20 World Cup in Korea gave them big help. The U-20 competition, staged from May 20 to June 11, was the first FIFA youth competition to use video assistance.

“We benchmarked many things that happened at the U-20 World Cup,” Cho said. “It really gave us a lot of help.”

Just like other competitions, the K-League said the VAR system will be used only when “match-changing” situations occur, such as goals, penalty decisions, direct red cards and cases of mistaken identity.

The league added that 12 cameras will be used to run the VAR system, but the number of cameras can increase depending on the broadcasters. The officials brought in three vans that are equipped with the VAR system, and each vehicle cost 200 million won ($176,500).

The K-League claimed that the VAR system will not interrupt the game significantly. Its test results showed that it took an average 20 seconds for a referee to make a decision through the VAR system.

“Accuracy is more important than time,” said Yoo Byung-seop, a VAR system instructor. “The VAR system is not about making the best decisions but to prevent clear and obvious officiating errors.”