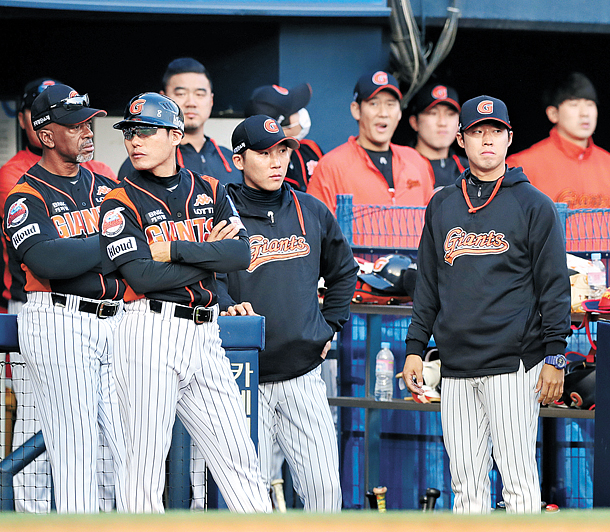 The Lotte Giants during the game against the Doosan Bears on May 29. The Giants have been struggling in the month of June, where they once got in a six game losing streak. [JOONGANG PHOTO]

The Lotte Giants finally ended their six-game losing streak with a 10-2 victory over the KT Wiz on Monday, proving Lee Dae-ho’s performance in each game depends heavily on the Giants’ overall performance.

During their game against the Nexen Heroes at the Gocheok Sky Dome on Friday, Cho Won-woo, manager of the Giants, made an error on the line-up sheet, where he accidently put Lee as the Giants first baseman and fourth batter rather than designated hitter. Lee wasn’t able to play in the game at all and Noh Kyung-eun played as fourth batter, getting struck out both times he got on the mound. 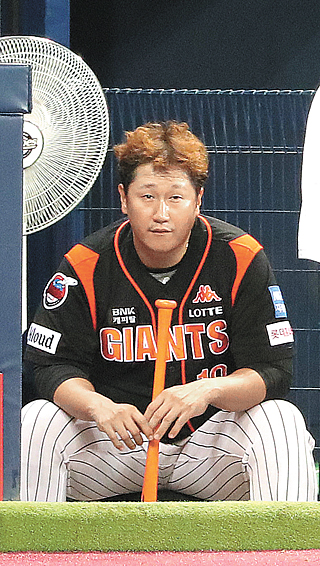 “I wanted to assign Lee as a designated hitter on Friday so he can rest,” Cho said. “Of the many line-ups, I accidentally submitted the one that had Lee as a first baseman.”

During another game against the Heroes on Sunday, Cho came up with a last resolution, having Lee as their third batter, rather than fourth. But this led the Giants to a six-game losing streak and extended their gap with the Heores by five games.

As of Monday, the Giants are ranked seventh in the KBO with a 0.284 batting average and 336 runs.

That said, prior to the start of the season, in January, the Giants signed a four year contract worth 15 billion won ($13 million) with Lee, considering his experience in playing four seasons for Nippon Professional Baseball and a year playing for the Seattle Mariners of Major League Baseball along with the premium added of being Busan’s all-time favorite. Since the Giants weren’t able to advance to the postseason for the past four years, as soon as Lee left the team, Lee was more than welcome.

In the beginning of the season, the Giants were ranked fifth until the end of May, when Lee consistently hit home runs. But once he started showing weakness on fastballs pitched towards his body, the Giants made a significant drop in performance.

In the month of June, playing in a total of 17 games as of Tuesday, Lee wasn’t able to hit a home run. 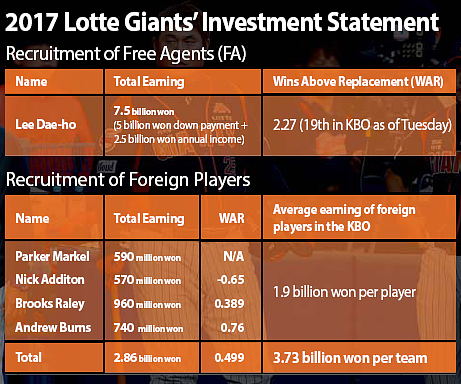 In the early 2000s, when the Giants started the season among the bottom of the KBO, fans expressed their anger through banners that said, “You should cheer and we should play baseball.” When the Giants advanced to the postseason in 2008, Busan caught baseball fever. But last year, once the team dropped again to the bottom, fans criticized the team by putting up banners saying, “are you really a professional team?”

The Giants took the risk and recruited Lee. But Lee alone isn’t enough to the fill the absence left by Hwang Jae-gyun, who currently plays for the San Francisco Giants’ minor league team, and Jim Adduci of the Detroit Tigers.

They both left the Giants after the 2016 season. Rather than depending solely on Lee, it’s time to figure out some other plans in case Lee struggles again.

The Giants will conclude their three game series against the Wiz with another game to be played today at 6:30 p.m. at Suwon Baseball Stadium.