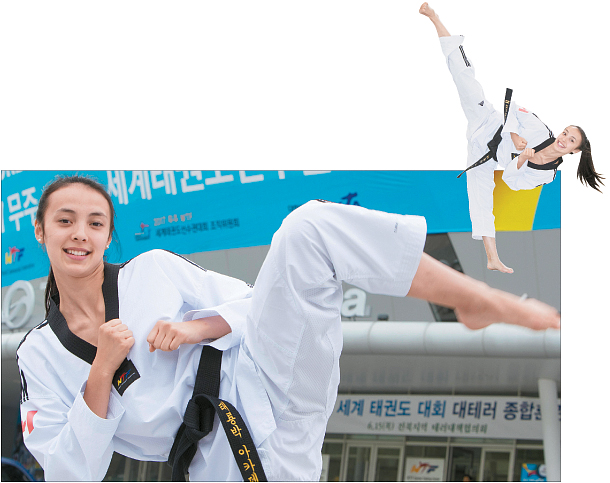 Skylar Park at the Taekwondowon in Muju, North Jeolla. Park hopes to win at the World Taekwondo Championship, which is her first major tournament. [OH JONG-CHAN]

Two-time Olympic gold medalist Jade Jones of England defeated Skylar Park of Canada in March in an event match at the United Nations Headquarters for the International Day of Sport for Development and Peace (IDSDP).

During the match, Jones’ performance was almost perfect, giving her opponent almost zero opportunities for a hit.

But Park, a World Taekwondo Junior Championships’ gold medalist, wasn’t discouraged. Rather, she considered the loss a great experience in helping her become better. Since Park just finished her junior career last year, she considered playing in an event match against Jones an honor.

“I learned a lot through the event match with Jones,” Park said.

Three months has passed since then and now Park is in Korea to participate in her first major tournament, the 2017 World Taekwondo Federation (WTF) World Taekwondo Championships - and the two will likely face off again in the quarterfinals, as they fall in the same weight category - 57 kilograms (125 pounds).

Park, born to a Korean father and an Italian mother, is a third-generation Korean Canadian. Using her height of 1.77 meters (5 feet 9 inches), Park actively engages aggressive fighters and has now become a rising star in women’s taekwondo. After an outstanding junior career, Park started competing in senior matches starting this year.

Park comes from three generations of taekwondo fighters. Park Deuk-hwa, Park’s grandfather, was a taekwondo master who served in the U.S. Forces Korea, immigrated to Canada in 1977 and opened a taekwondo studio. 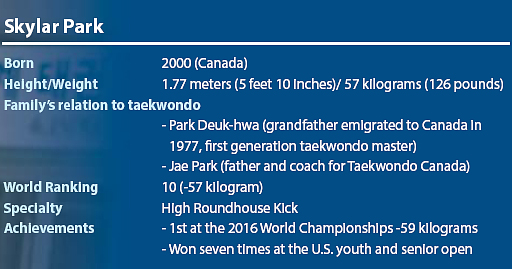 Park’s father, Jae Park, is a head coach of the Canadian national taekwondo team and her coach. Not only that, her two brothers also represent Canada. Of a total of 21 family members, including Park’s grandfather and her cousins, only two do not have black belts.

“A lot of my friends say that they find it hard to get along with their dads but that’s not the case for me,” Park said. “My dad is a great coach and a teacher. I fully trust him.”

Aside from taekwondo, Park is an all-around athlete who plays football, golf and track-and-field. Also, she is fulfilling her duty as a student and gets close to perfect scores on her final exams.

Park was selected to give a graduation speech on June 29th, but she declined to compete at the World Championship. Next, she hopes to win gold at the 2020 Tokyo Olympics.

The 2017 WTF World Taekwondo Championship, held once every two years, is expected to be the world’s largest competition. The event will start on Saturday, June 24 to 30, in Muju, North Jeolla. A total of 971 athletes from 183 nations will be competing in eight different categories - four for men and women - for a total of 16 gold medals.