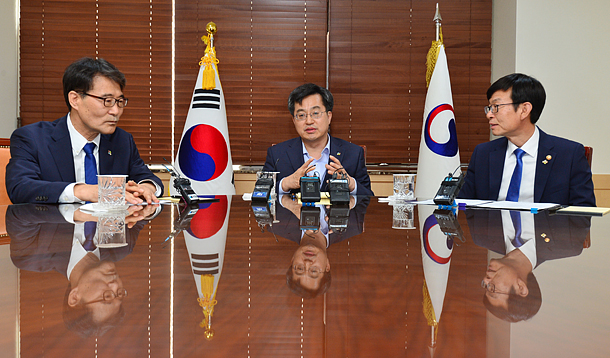 The Moon Jae-in administration’s top three economic policy officials promised in their first meeting together Wednesday to coordinate their economic policies and maintain communication between their organizations.

The finance minister stressed that while the economy is showing signs of improvement based on several macroeconomic indicators including exports and GDP growth, the economy as felt by consumers and the job market are still failing to meet expectations.

“There’s a lot for the economic team to do,” Minister Kim said.

His colleague at the Fair Trade Commission, Kim Sang-jo, stressed the need for different government departments to move as one team on important economic issues. Commissioner Kim said consistency was the key to successfully carrying out policies.

There had been some speculation that Kim, a longtime critic of Korea’s powerful conglomerates, would try to ram through corporate reform as head of the government’s big-business watchdog.

But at the meeting, Kim emphasized again that he had no plans to rush corporate reform, saying he would take a more cautious and rational approach that will not only be consistent with other department’s policies but also be predictable so that the economy won’t be heavily impacted by the changes.

Kim assured he would listen to the advice of the finance minister while delivering market concerns to the government during future economic team meetings.

Jang, President Moon’s chief policy adviser, said he hopes such meetings will be a starting point in winning credibility from the public.

However, he noted, there’s still a lot of work to be done because Moon has yet to fill his cabinet.

“It’s been more than a month since the government launched, but not all of the cabinet positions have been filled,” Jang said. “But this meeting of three to discuss economic issues shows the public that the economic issues being discussed are led by the deputy prime minister.”

In other related departments, the nominee for land minister has gone through a confirmation hearing at the National Assembly, but the government has yet to nominate a trade minister and Financial Services Commission chair.