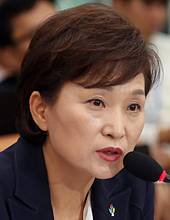 The National Assembly’s transportation committee on Wednesday approved the nomination of Kim Hyun-mee, President Moon Jae-in’s nominee for land and transport minister. She is expected to be sworn in today.

“Kim, who is the first female nominee for land minister, has served on various National Assembly committees including finance and state affairs,” the committee said in a statement, “and we believe she will work well with many other government branches.”

The committee acknowledged critics who brought up allegations of past ethical lapses including plagiarizing her graduate school thesis, tax evasion and real estate speculation. However, the report expressed hope that Kim will do her best to handle pressing issues, including stabilizing an overheated real estate market and furthering the country’s transportation infrastructure.

Two other appointees - Kim Sang-jo, chairman of the Fair Trade Commission, and Kang Kyung-hwa, minister of foreign affairs - failed to gain approval but were installed in their positions nonetheless. They did not require legislative confirmation.