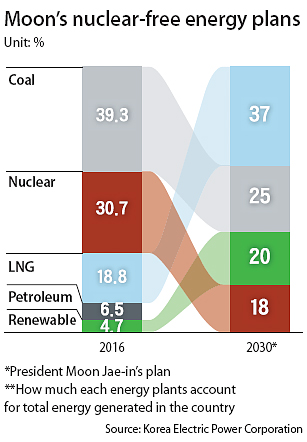 Electricity bills will rise as much as 21 percent if President Moon Jae-in pushes ahead with his plans to move toward a nuclear energy-free future, a recent study by the state-run think tank said.

The Korea Energy Economics Institute said Tuesday that operational costs of the nation’s power plants will rise 11.6 trillion won ($10.1 billion), or 21 percent, since it costs more to generate power through non-nuclear power plants such as renewable energy ones.

Currently, coal power plants generate 39.3 percent of the total electricity supplied in the country, followed by nuclear power plants with 30.7 percent. But Moon plans to change the structure drastically.

“The nuclear-centered energy policy will be abolished and Korea will move toward a nuclear-free era,” the president said in a ceremony marking the shutdown of the country’s oldest nuclear reactor, the Kori-1, in Gijang, Busan, on Monday. “All construction plans for new nuclear plants under preparation will be scrapped. The life spans of existing plants will not be extended.”

Moon plans to raise the dependency of liquefied natural gas (LNG) from the current 18.8 percent to 37 percent by 2030 and of renewable energy from 4.7 percent to 20 percent. In the same period, Moon’s goal is to reduce the energy generated by coal plants from 39.3 percent to 25 and nuclear plants from 30.7 percent to 18 percent.

Currently, a household of four pays 53,000 won a month on average, but prices will rise to 64,130 won under Moon’s plans to replace nuclear power plants with more environmentally friendly ones, the think tank said. Moon’s initiative cuts the use of nuclear power plants since they are dangerous in disasters like earthquakes. But the administration still doesn’t have specifics to deal with the possible hike in energy prices.

Nuclear power plants are the most cost efficient among all major power plants. According to Korea Hydro & Nuclear Power Corporation, it costs 68 won for a nuclear power plant to generate 1 kilowatt per hour of energy and 73.8 won for coal power plants. However, it costs 101.2 won for LNG plants and 156.5 won for renewable energy sectors. This is why analysts believe it will lead to the hike in the energy bills.

“We have researched the new administration’s energy plans and found out that they will have positive impacts on reducing the greenhouse emission but will be negative economically as the costs for operating power plants will grow nearly 21 percent,” said Park Chan-gook, a researcher at Korea Energy Economics Institute. “It is an important task to expand the eco-friendly renewable energy sector but the government needs to consider using various kinds of power plants harmoniously.”

Park added that the 20 percent rise in energy bills will contribute to raising inflation by 1.16 percent, while lowering the GDP 0.93 percent. The researcher, however, said the energy supply won’t be a big problem even though the government depends more on renewable energy, but developing energy storage system is necessary since the plants tend to be intermittent, or easily affected by natural circumstances. Not every expert agrees that Korea’s energy capacity will remain high after Moon’s plans shut 40 percent of its 24 nuclear power plants within 12 years as their lifespans end.

Since Moon publicly announced his nuclear energy-free initiatives, shares related to energy have been fluctuating significantly in the past few days. Share prices of companies related to nuclear power plants dropped, while alternative energy companies soared.