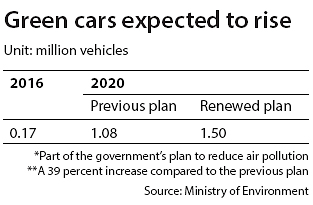 Amid the government’s effort to reduce air pollution in Korea, foreign carmakers met Wednesday to discuss the prospect of green vehicles, focusing on hybrid cars.

“The local auto industry, including the imported carmakers, is at a crucial juncture in its history,” said Yoon Dae-sung, vice chairman of Korea Automobile Importers and Distributors Association (KAIDA). “Regulations [on CO2 emission] become more stringent … and technologies for various types of eco-friendly cars such as hybrids are showing rapid development.”

“The number of eco-friendly vehicles globally will stand at about 13 million units by 2022,” said Lee. “Hybrid vehicles will take up about 48 percent of the entire market, according to some projections.”

Interest in eco-friendly vehicles is growing, especially since the inauguration of President Moon Jae-in, said Lee. President Moon said he will reduce fine-dust emissions in Korea by 30 percent during his term. He blamed diesel vehicles for the pollution and pledged to remove them from Korea’s roads by 2030.

In line with Moon’s policy direction, the Ministry of Environment released measures dedicated to the reduction of fine dust this month. Proposed measures included the sale of 1.5 million green vehicles by 2020. The ministry also said the government will expand the number of EV charging stations to more than 3,000 nationwide.

While the growth of the overall EV market is inevitable, some analysts said hybrid cars are the most pragmatic options.

“The problem with fully electric cars is that they require rapid charging infrastructure in order to allow long-distance driving,” said Abe of Toyota. “Some companies like Tesla are trying to develop and install the stations but the infrastructure costs a lot and is not suited for regular households.”

“Such infrastructures are unnecessary for hybrid cars,” Abe added. “It is a system optimized for energy management [of cars] and can be the answer to the environmental issue the world is facing today.”