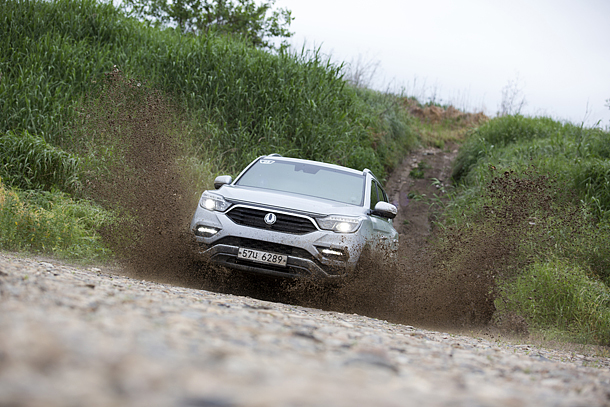 SsangYong Motor’s G4 Rexton on a dirt course near Paju, Gyeonggi, during a test drive earlier this month. The G4 Rexton comes with a frame made of high-strength steel developed in partnership with Posco, ensuring safety while minimizing road and wind noise. [SSANGYONG MOTOR]

After the Tivoli SUV saved SsangYong Motor from the brink of insolvency in 2015, the automaker is hoping for a home run with the G4 Rexton.

SsangYong has thrown its hat in the premium SUV market once dominated by Kia Motors’ Mohave and imported models like the Ford Explorer. Its ace in the deck is the Rexton, a full-size SUV that the automaker unveiled during this year’s Seoul Motor Show.

The Korea JoongAng Daily recently took the Rexton out for a spin. Simply put, the car offers a comfortable and quiet driving experience even on the roughest terrain out there.

Before the test drive on a 124-kilometer (77-mile) course from Goyang to Paju in Gyeonggi, the company explained it decided to develop a premium SUV because the market lacked players outside Kia and foreign automakers. 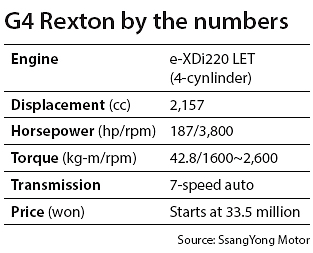 “The demand for full-size SUVs in Korea is on the rise,” said Mang Jin-su, marketing director at SsangYong. “There are many compact SUVs out there but not enough premium SUVs.”

The first thing that caught the attention of this reporter was the ample head and leg room inside the vehicle. Although a five-seater, the interior space reminded the reporter of large seven-seaters often spotted in the United States. Napa leather inside the car gives it a luxurious vibe.

During the briefing, SsangYong highlighted the vehicle’s frame made of high-strength steel developed in partnership with Posco. The sturdy frame, the company said, increases the car’s tensile strength by over 20 percent compared to other models with conventional steel, meaning enhanced safety in the event of a crash.

Indeed, even at a speed of 130 kilometers (80 miles) per hour on a highway, wind and road noise was barely audible.

The powertrain of the Rexton comes with a four-cylinder e-XDi220 diesel engine. Featuring a seven-speed transmission developed by Mercedes-Benz, it appears to have enough push to drive the full-size SUV forward on the motorway as well as in urban settings.

The Rexton, with 187 horsepower, does lack in comparison to its rivals like the Mohave at 269 horsepower, but SsangYong has more than made up for it by reducing the weight of the car to about 2 tons, nearly 440 pounds lighter than the Mohave.

Due to its massive size, this reporter expected the vehicle to respond slowly to the gas pedal, but the Rexton reacted sensitively to the accelerator even when it was at a complete stop.

SsangYong explained the low-end torque engine optimized for Korea’s hilly terrain makes it possible for the SUV to go from a complete stop to 20 kilometers per hour in just 1.49 seconds, faster than other Korean-made SUVs including Kia’s Mohave (1.61 seconds) and Hyundai’s Santa Fe (1.51 seconds).

The Rexton proved its worth as an all-round SUV on an off-road course in Paju.

The course was wet and muddy due to rain, and despite this, the reporter was able to keep the vehicle under control without much effort. The vehicle’s suspension seemed to be absorbing enough shock to allow the driver feel barely any roughness coming from the road surface on the steering wheel.

The vehicle allows the driver to switch to four-wheel drive easily with a dial switch. Putting the vehicle in four-wheel drive at the end of a dirt course, the Rexton was able to move up a hill of over 45 degrees without hesitation.

Other technical features that make the drive convenient include off-lane assistance and blind-spot check lights on the side mirrors.

How the G4 Rexton performs will be crucial for SsangYong, as the company hopes to regain its reputation as the country’s top SUV producer and expand its share in segments of that market other than subcompacts.

The vehicle has enjoyed a decent response from the market so far. The company received 7,500 orders in May and has delivered about 2,700.

Mang, the marketing director, said 83 percent of the customers were male and 17 percent female. The main reasons behind the purchases, according to a survey conducted by the company, include design, safety and brand value.