‘We must collect scientific data on fine dust before anything’

‘We must collect scientific data on fine dust before anything’ 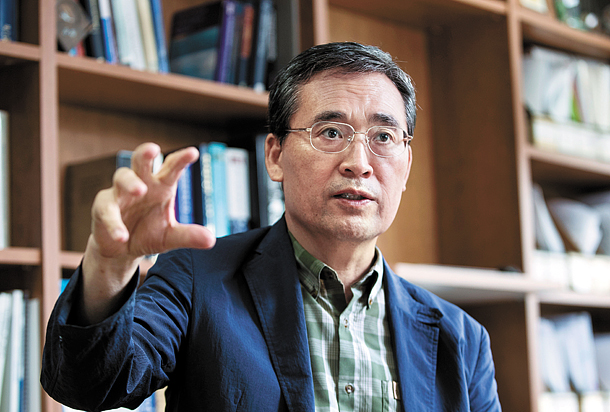 The traumatic view of a fine-dust-covered sky in Korea this spring is still vivid. As dust particles filled the blue sky above the entire city, mountains and hills, the whole country was overcast with gray. Then, miraculously, the skies cleared.

But one expert warns that fine-dust particles are just hidden from sight for a while and are due to come back any time.

“It’s the direction of the wind that’s changed, not the source of pollution,” says Sohn Byung-ju, 61, president of International Radiation Commission, which has 50 countries participating as members. “The first necessary step is to secure objective evidence related to where the fine particles are from.”

Sohn is also heading the Korea Meteorological Society, founded in 1963, which has 2,600 members, including researchers and workers from private companies in Korea.

“As Trump tries to pull out [of the Paris agreement], China is likely to step in to take leadership of the world’s environmental movement,” Sohn said. “We need to make the most of this situation.”

Q. Choking dust is nowhere to be seen in the sky. Is it a sign we can relax?

A. Not at all. Original sources of fine dust are still there. The reason our view became clearer is because high pressure in the air moved out through the East Sea and wind blew from the northern maritime province. Usually wind blows from China to Korea, but now the northeastern wind makes it seem like our sky is clear. As long as China keeps polluting the air, fine dust particles will keep blowing into Korea.

Why was there so much fine dust in April and May?

Under high atmospheric pressure, the air stays still. As such pressure was formed in skies above the Korean peninsula, fine-dust particles that blew in ended up locked there because of the still air. Then fine dust created in Korea added to the dusty air. This resulted in serious suffering by people living in crowded areas of the peninsula, such as Seoul.

There are reports that fine dust emissions at home and from China are decreasing. But then why is the situation getting worse?

The situation is deeply related to slow air movement over East Asia, due to climate change. It means even if the same amount of pollutants are sent out into the air, they are likely to stay longer in the air. This is why we feel the smog to be heavier, despite reports that actual emissions of fine dust have been cut. Climate change from global warming influenced weather patterns in the country and resulted in dead air.

President Donald Trump of the United States declared the U.S. withdrawal from the Paris Convention on Climate Change. He even claimed climate change is a hoax.

The Paris accord represents worldwide agreement to limit climate change to 2 degrees Celsius by 2100. The consent was drawn to make a livable condition in the future, despite rising temperature of the Earth due to global warming. To reach the proposed goal, the participating countries decided to reduce greenhouse gas emissions by 1.5 percent every year until 2030. In the case of South Korea, its 2030 target is to reduce greenhouse gas emission by 37 percent from the business-as-usual levels.

What are some logical grounds to counter Trump’s claim that climate change is a hoax?

About 99 percent of climate scientists say there is climate change, and continuing life as it is now will bring us closer to an irrevocable time. Glaciers are melting in the North Pole due to climate change and that melted ice is rising sea levels. Satellite observation of the Arctic Ocean show that frozen surfaces continue to decrease. This is why the North Pole Route is being created. The melting of glaciers in the Alps is also one aspect of climate change.

Then why is Trump taking such a radical stance?

The Republicans were more aggressive in tackling climate change than Democrats. However, as Trump linked the increased production of coal and shale oil with an expanded labor market, it became hard for him to pursue greenhouse gas reduction. But it won’t be that easy for the United States to leave the agreement just like that. There was already an announcement, but repulsion is very strong in the United States, largely because of the withdrawal procedure, which could take up to four years. Still, Trump is likely to keep spreading his claims that climate change is a hoax.

Is the scheme similar to what tobacco companies used to do in the past?

I’d say it’s very similar. As evidence that smoking harms one’s health started to appear in the 1970s, a force to oppose the evidence emerged. They are the so-called merchants of doubt. They argued there is no link between lung cancer and smoking. For instance, when an empirical study on the harmful consequences of second-hand smoking was released in Japan, tobacco companies hired scholars to suggest different opinions. They simply blurred the point of the study by constantly creating doubt.

Persuading China is the key issue in our case, isn’t it?

Like the United States in the 80’s, China will be reluctant to recognize the problem. What we need to do is to secure as much evidence as possible and earn official approval from the international community with evidence. Contributing to renowned expert journals so more people in the world can recognize the problem, and creating public discussion, are important steps. If one thinks gathering environment ministers from Korea, China and Japan to talk about the issue will have an impact, this is a very naïve approach. The method is hardly going to work. We need to study overseas cases and secure enough evidence.

Currently we don’t even know how much of the dust is from China, right?

Without objective evidence, we can’t talk to China about the issue. Without it, there can be a wrong diagnosis of the situation, starting from calculating actual emissions. There needs to be integrated research on how much fine dust is created at home and in China and also how climate change is affecting the situation to come up with a reasonable diagnosis.

This is something the government and the scientific community should be working on systematically, but it is not working out very well.

There should be enough workforce for research. Why is it not working out?

There needs to be a controlling unit that can approach the issue with an integrated view. In the United States, there is the National Center for Atmospheric Research under the presidential research body called the National Science Foundation. There are hundreds of experts in the center. In Germany, Max Planck institutes play the same role.

It is too bad there is not even the basic infrastructure in Korea.

Right now, we don’t have the capability to observe and respond to climate change. Now we need to secure and accumulate scientific data by ourselves. Until now, we have been using information made by foreign researchers. It is not until 2019 that the nation’s Ministry of Environment will launch an environmental satellite to monitor climate change and air pollution.

Then how should we cooperate with China?

We should learn from the acid rain case between the United States and Canada, where the liable country for the emission paid the cost.
The United States let companies take liability in the form of a carbon credit system. There’s no other way but to find reliable evidence that the fine dust is directly linked and is sourced from China.