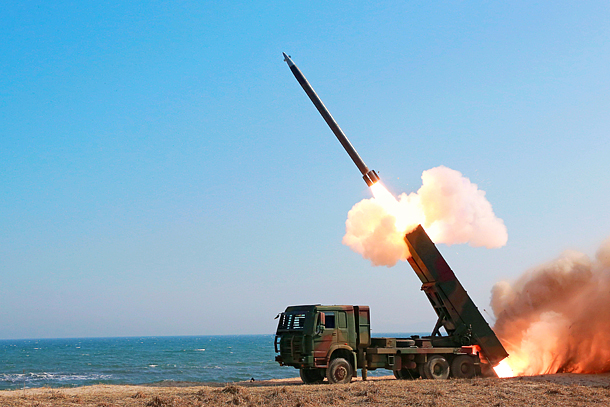 North Korea has developed multiple rocket launchers that can hit targets as far as 200 kilometers (124 miles) away with an imagery-guided system, putting South Korea’s military headquarters in Daejeon within range, according to a classified document drawn up by Pyongyang’s munitions department exclusively obtained and reported by the JoongAng Ilbo on Wednesday.

Based on the highly classified document, the North appears to have completed the development and deployment of 300mm multiple rocket launchers equipped with imagery-guidance and GPS systems that can hit Daejeon, where the joint military headquarters of the army, navy and air force are located.

A multiple rocket launcher system is a type of rocket-propelled artillery system that can fire multiple rockets simultaneously. It boasts high mobility as it is mounted on truck or tank-like chassis. Not much modification is required for vehicles to have the launchers mounted.

According to the document, North Korean leader Kim Jong-un convened a meeting with senior officials of the military munitions department under the Workers’ Party on March 1 and extolled the development of the systems.

“As we have now have a monitoring system and program for multiple rockets, we have completed our preparation to target 10,000 important facilities throughout South Korea. Our goal of reunifying the peninsula has no barrier,” Kim was quoted as saying in the document.

Kim’s March 1 meeting was not reported by state-run media, a sign of the sensitive nature of the meeting.

The South Korean military views Kim’s use of the term “program” to mean an imagery-guided system, which helps a rocket in the final stage of trajectory to hit an intended target using imagery information from an attached camera. In such a system, a rocket could compare an object that it sees with a camera at the final stage of flight with a target image programmed in beforehand, improving accuracy.

This capability was the surprise in the document obtained by the JoongAng Ilbo.

The military believes the North spent about 15 years developing the 300mm multiple rockets after it obtained blueprints from China around 2002.

If the North has indeed developed the 300mm-multiple rocket launchers, it could pose a direct threat to South Korea because their trajectories are too low for anti-missile systems to intercept.

North Korea already has multiple rocket systems ranging from 107mm to 240mm in diameter. But due to their size, such rockets are not equipped with imagery-guidance systems.

“By definition, multiple rockets don’t have guidance systems because they are launched in numbers to reduce a targeted area to ashes,” said Lee Chun-geun, senior researcher at Science and Technology Institute.

“But it appears that the North has developed a rocket capable of flying 200 kilometers and hitting a target aided by GPS satellites and imagery from an attached camera in order to make sure it hits an intended target,” continued Lee.

A military official told the JoongAng Ilbo that the North first test-fired 300mm multiple rockets in April 2013, followed by another precision-launch test supervised by leader Kim in March 2016 in Hamhung, South Hamgyong Province. The official spoke on condition of anonymity.