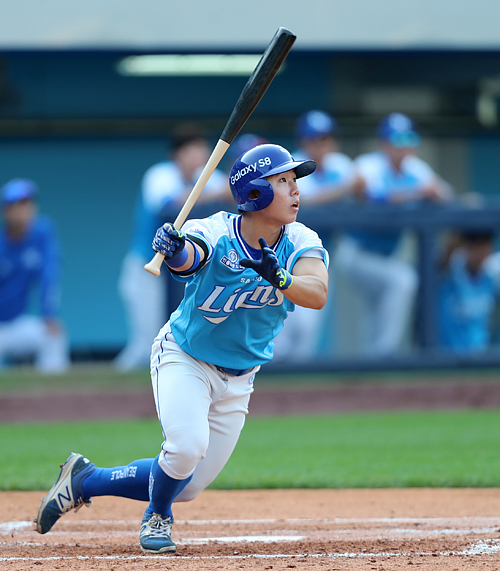 Kim Seong-yoon of the Samsung Lions during the game against the SK Wyverns at Daegu Lions Park on Sunday. [SAMSUNG LIONS]

In a sport where there are more disadvantages than advantages to being short, a number of shorter players are proving some things matter more.

“It doesn’t matter what your height is, it’s what’s in your heart,” said Kirby Puckett, former center fielder for the Minnesota Twins who got elected to the Baseball Hall of Fame in 2001.

It is rare to see a shorter baseball player succeed, yet shorter players in the Korea Baseball Organization (KBO), Nippon Professional Baseball (NPB) and Major League Baseball (MLB) are making their moves.

In the KBO, Kim Seong-yoon of the Samsung Lions, a rookie in the KBO and its shortest player at 1.63 meters, has made a stellar debut. Kim, who joined the KBO right after graduating from Posco High School, is 20 centimeters shorter than the average KBO player. But he managed to hit a two-run home run against the SK Wyverns on Sunday, only in his sixth KBO game since his debut.

“I wanted to break the stereotype people have about short players,” Kim said. “I’m glad I was able to prove to people that I can also hit home runs.”

Since Kim never got to hit a home run through his high school career, finally getting to hit one in the KBO had a lot more meaning. Aside from fans, Kim also surprised his club, the Lions.

“We called him up from the futures league for his good base running and defensive skills,” Kim Han-soo, manager of the Lions, said. “We were really surprised by his home run.”

Up until last year, the shortest player in the KBO was Kim Sun-bin of the Kia Tigers. Since his debut in the 2008 KBO season, he has shown great speed and defensive skills. During his time playing in the Sangmu Baseball team in 2015-16, Kim Sun-bin improved his batting. As of Wednesday, he has managed to hit a total of 20 doubles in 68 games, having already exceeded his seasonal best of 19 during the 2012 season.

In the major league, Jose Altuve of the Houston Astros is the shortest active player in the MLB, standing at 1.65 meters, but he is one of the MLB’s biggest stars. Despite his height, Altuve managed to hit a total of 24 home runs in the 2015 season and has hit ten home runs so far this season as of Wednesday. Not only that, Altuve was the American League (AL) batting champion in 2014 and 2016 and the AL’s stolen base leader in 2014 and 2015.

“To build strength, Altuve used to do three to five sets of squats with 450 pounds before the game,” said Trey Hillman, manager of the SK Wyverns, who used to coach Houston Astros.

Yet another example is to be found in the NPB, where Daichi Mizuguchi of the Saitama Seibu Lions is the shortest player at 1.63 meters. Though Mizuguchi, who made his NPB debut in 2012, is still a substitute player, he has recorded a batting average of 0.360 this season.

“I don’t want to lose to taller players,” Mizuguchi said.