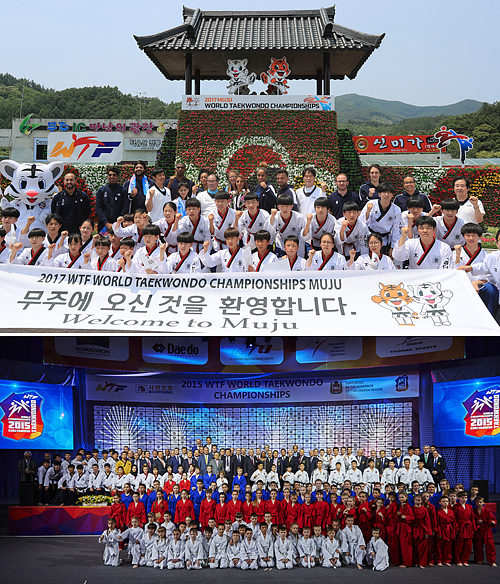 A taekwondo demonstration team including 32 North Koreans will take part in the opening and closing ceremony of the World Taekwondo Federation’s World Taekwondo Championship next week in Muju.

The International Taekwondo Federation’s demonstration team, which is led by a North Korean, has 36 members including the 32 North Koreans. Included in the group are Ri Yong-son, the president of ITF, and Chang Ung, the former ITF chief and the only North Korean member on the International Olympic Committee (IOC), who will be arriving through Gimpo International Airport today.

After the performances, the team will have additional demonstrations in Jeonju, North Jeolla, on Monday and at Kukkiwon, the WTF’s headquarters located in Seoul, on June 28.

Since Chang is expected to stay in South Korea throughout the team’s trip and is scheduled to attend meetings with South Korea sports officials, it is likely the North and South Korean International Olympic Committee will discuss the issue of a joint women’s ice hockey team for the 2018 PyeongChang Olympics. Thomas Bach, the IOC president, will also visit South Korea to attend the closing ceremony of the Championship. Bach will be arriving in South Korea on July 29.

Do Jong-hwan, the new sports minister, will ask Chang and Bach for their support in securing North Korea’s participation at the PyeongChang Olympics, starting in February 2018. Do has been searching for ways to have North Korea participate at the Olympics and believes that the core issue is a joint women’s ice hockey team.

“For the PyeongChang Olympics to successfully fulfill its goal of hosting a peaceful Olympics,” he said, “it’ll all depend on the participation of North Korea.”

The WTF’s World Taekwondo Championship in Muju, starting tomorrow and going until June 30, is expected to be the world’s biggest taekwondo competition. The event first started in Seoul in 1973. It is considered a major tournament in taekwondo and this year marks its 23rd year.

A total of 973 athletes from 183 different nations will be competing for 16 gold medals in eight different weight categories - four for men and four for women. Including the coaching staff and officials, a total of 1,768 people have come to South Korea for the event. By comparison, the 2015 World Championship held in Chelyabinsk, Russia, two years ago, had a total of 1,458 people from 139 nations.

South Korea has selected 16 top members from eight different weight categories to represent their countries at the championship. The members include the four medalists from the 2016 Rio Olympics - Lee Dae-hoon, Kim Tae-hun, Oh Hye-ri and Kim So-hui.

Lee, the two-time World Championship gold medalist, will be aiming to win gold for the third time in the men’s 68 kilogram event. Since Lee missed his chance for a career grand slam by winning bronze at the Rio Olympics, he hopes to redeem himself with gold at the World’s. Kim will be competing in the men’s 54 kilogram event. Kim, who won gold at the 2014 Incheon Asian Games, is considered a rising star in South Korean men’s taekwondo.

Looking at South Korea’s overall performance in the four recent World Championships, it is about time for them to top the overall leaderboard, as they’ve failed to finish on top, losing to Iran in 2011 and 2015 and to China in 2009. South Korea has only topped the overall standing once at the 2013 World Championships in Puebla, Mexico, by winning six gold, two silver and one bronze.

“Our goal is the achievement made at the World Championship in Puebla,” said Kim Jong-ki, head coach of the South Korean taekwondo team.