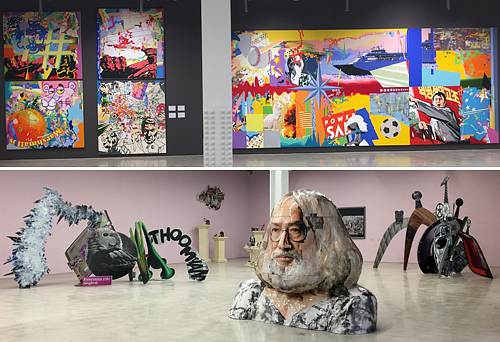 The K Museum of Contemporary Art is a large museum that opened in December on a busy downtown street of Gangnam district, southern Seoul. It recently opened solo exhibitions of two well-known Korean artists - Dongi Lee and Osang Gwon.

The semi-retrospective shows of the two artists under the title “This is Contemporary Art Museum Part 2” will help visitors to this new museum understand its character. Lee is a painter and Gwon works with photography sculpture, and each has their own unique style. But they share some commonalities - close relations with contemporary pop culture and strong visual messages with a tinge of humor.

Gwon, 43, dubbed the pioneer of photography sculpture, presents sculptures from what he calls the “Deodorant Type” series, along with his latest “New Structure” series and more.

The “Deodorant Type” series are sculptures of models made with light materials such as Styrofoam covered with numerous photographs of models, taken at different angles under various kinds of light. They are like three-dimensional versions of Cubist paintings. The iconographies of classic sculptures were reproduced with contemporary elements in this series.

The “New Structure” series of sculptures are the artist’s play with perspectives. He took the 2-D photos of 3-D daily objects and made 3-D sculptures with the enlarged 2-D photos in the style of American artist Alexander Calder’s “Stabile” series.