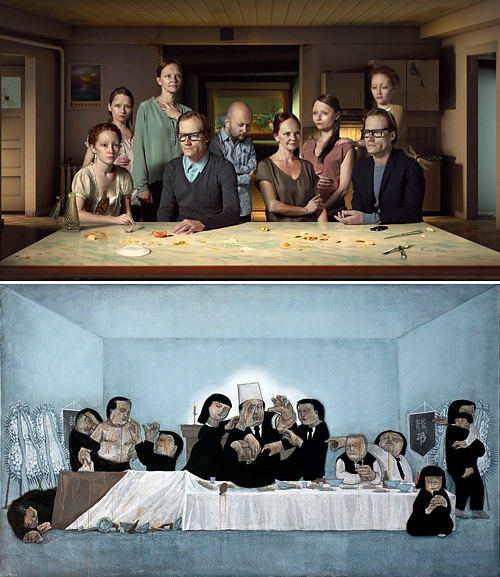 Belgian artist Alex Verhaest’s media art piece “The Dinner,” top, and Korean artist Moon Ki Cho’s oil and acrylic painting “The House of Mourning,” above, are part of the two-person exhibition “The Absence of Paterfamilias” at Barakat Gallery Seoul. Verhaest’s subtly-moving portraits and still lifes have inherited the theme and ambience of old paintings of the Netherlands and Flanders. [BARAKAT GALLERY]

At first glance, the five small objects now hanging in a row in a room of Barakat Gallery Seoul on Samcheong-ro in central Seoul look like an early Northern Renaissance master’s portrait paintings. But a closer view reveals they are five video pieces that show five figures whose facial expressions and gestures change very subtly, reflecting their complex psychologies.

Their delicately-distorted forms as well as the color, shade and light effects will remind viewers of the work of old Dutch and Flemish masters.

The works are part of young Belgian artist Alex Verhaest’s project “The Temps Mort / Idle Times.” The other works that make the project are on view in the room’s darkened basement. Among them is a large-size video panel that shows a group portrait of the five figures (four of them appear twice in the same image), who move and talk while interacting with the audience. Its title is “The Dinner.” The five small still-life videos each symbolize the five figures’ mental states.

The works are based on a fiction set by the artist. The fictional figures are members of a family whose paterfamilias committed suicide.

They are part of the two-person exhibition, “The Absence of Paterfamilias.” The other artist in the show is Korean Moon Ki Cho. His oil and acrylic painting “The House of Mourning” is opposite Verhaest’s “The Dinner.”

“The two paintings share some common points - the compositions that will remind the viewers of Leonardo da Vinci’s ‘Last Supper’ and the themes - the love-and-hate relationship among family members and the family as the smallest unit of the social institutions that restrains individuals’ actions,” explained Park So-hyeon, chief curator of the gallery.

Among Cho’s other works, a painting that follows the iconography of European Middle-Age sacred images is juxtaposed with a real medieval icon. It is in accordance with the venue, as Barakat Gallery, an art business founded in Jerusalem over 125 years ago which has been operated by a family for five generations, mainly deals with ancient and medieval art works from various parts of the world. The gallery now has branches in London and California amongst others. The Seoul branch opened last October, dealing in both old and modern art works.

Among the works on view in this two-person exhibition, Verhaest’s still-life videos clearly show inspiration from a genre of still-life paintings in the 17th-century Dutch Golden Age called Vanitas. It is the Latin word for emptiness or vanity.

The paintings typically feature a skull, a burned-down candle, a watch or hourglass, withering flowers juxtaposed with fresh flowers and luxurious items to show the passing of brief life and to emphasize mortality. But even still lifes of breakfast tables without those elements delivered the message of “memento mori (Remember that you have to die)” through its depiction of a cut-up fish showing signs of decay and other elements. 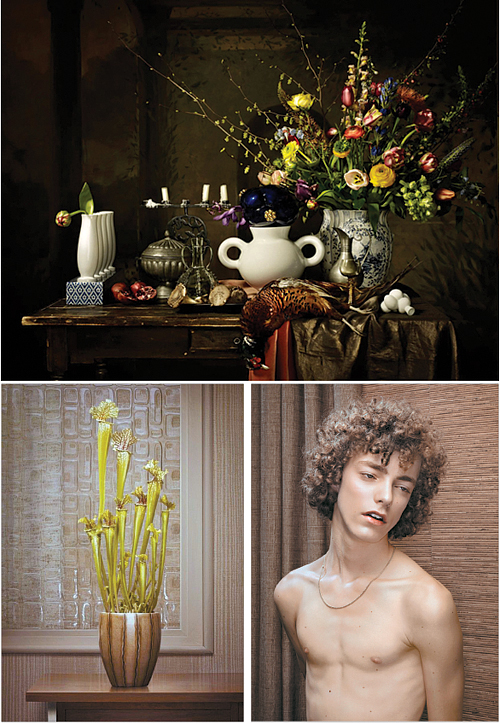 Dutch photographer Erwin Olaf’s work “Moooi 2”(2008), top, as part of the Dutch furniture and interior design company Moooi’s ad campaign, shows the strong influence from a genre of symbolic still-lifes from the 17th-century Dutch Golden Age called Vanitas. It is the Latin word for emptiness or vanity. Olaf’s “Still Life 04548,” above left, and “Portrait - Felix 536,” above right, as part of the artist’s non-commercial photographic series “Fall”(2008) also imply the same message as that of vanitas still-lifes - that all beauty and luxury are vain in the face of inevitable death. The works are part of his solo show “Human and Nature” at Gallery Kong. [GALLERY KONG]

Another artist inspired by those paintings is now holding a solo exhibition at nearby Gallery Kong. He is Dutch photographer Erwin Olaf, famous for his commercial photography.

Among the works on view in this show, titled “Human and Nature,” are two pieces from the “Moooi” series (2008), part of the Dutch furniture and interior design company Moooi’s ad campaign, which show the strong influence from Vanitas still lifes. Olaf’s portraits of beautiful but fragile-looking people and plants as part of the artist’s non-commercial photographic series “Fall,” (2008) also imply the same message as that of Vanitas paintings - that all beauty and luxury are vain in the face of inevitable death.