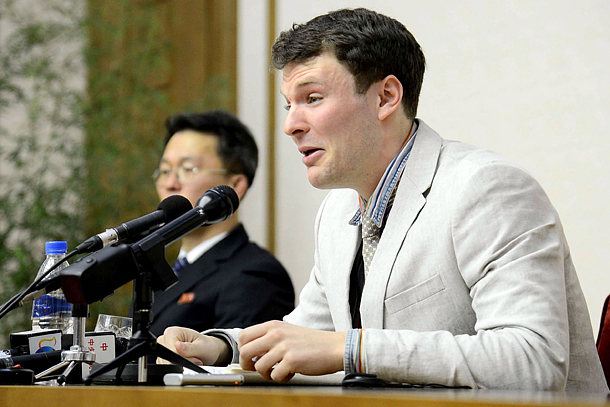 Otto Warmbier, right, speaks at a press conference in Pyongyang on Feb. 29, 2016, after he was arrested for committing hostile acts against North Korea. [AP/YONHAP]

One of the great joys of being a professor is the learning environment in which we operate. Our job is to educate students, but what is little known is how much the interaction in the classroom and seminars works both ways. We answer questions by the students, but professors learn from the comments of our pupils as well.

One such interaction prompted my most recent book on the origins of the U.S. alliance system in Asia. The disheveled young man blurted out in class over a discussion about U.S.-Asia relations in the early Cold War era, “Professor, why did the U.S. choose to create bilateral alliances in Asia [as opposed to a multilateral NATO-like structure in Europe]?” The fact that this student habitually arrived late to class, looking as if he had just rolled out of bed in time to make a lunchtime seminar would not be atypical. College students live by a different code of life for those four years of education, experimentation, and intellectual and social awakening.

Presumably, that same youthful exuberance for experiential learning and experimentation is what drove Otto Warmbier, a student at the University of Virginia, to visit North Korea. He did not go there to commit “crimes against the state” or purposefully offend government authorities. He merely sought an “extreme” vacation to a place that many have never visited before. His intentions were entirely innocent and indicative of a desire to learn. If he had indeed made an ill-advised decision to grab an unconventional souvenir (as alleged by North Korean authorities), then a reprimand was in order, but certainly not the fate Warmbier suffered.

One is reminded of another case in Rio de Janeiro last summer when some young men defaced a poster at a local gas station after a night out on the town. Like Warmbier, members of the U.S. swimming team were pulled off the plane at the last minute to stand before authorities. But as Olympic athletes who had won medals before the globe, their notoriety required a swift resolution. Warmbier, however, was not a world-renowned athlete, just a kid from Ohio who was left to languish in North Korean custody. He had no attention from the public or the U.S. administration, whose policy focused on being “patient” as a strategy, according to the angry words of Warmbier’s father this week.

We all know that the North Korean regime is brutal beyond words. As the UN Commission of Inquiry has noted, this is the worst human rights abuser in the world. Warmbier’s case makes that fact more apparent. But what this student’s predicament truly highlights is the regime’s incompetence. However Warmbier got sick, the regime proved incapable of addressing the situation. When he lost consciousness, the North Koreans were unable to provide medical care for him.

Moreover, they were unable to make a decision to step outside of their hermit shell to seek medical expertise from others to care for the young man. Such care did not have to come from the United States but from any number of countries in Europe or other parts of Asia, and in a quiet manner to save the boy’s life.

And when his health reached irreparable depths, the North Korean authorities were unable to make a political decision over 15 long months about whether to release him as a humanitarian act. What possible propaganda purpose could a comatose American college student have played for even the most hard-line in the regime? This is basic incompetence that was only rectified by aggressive negotiating efforts by the Trump administration.

The North must be held accountable for this unspeakably inhumane behavior. Condemnation should not just come from Washington but also allies like South Korea to excoriate Pyongyang for its treatment of the American student. Secretary of State Rex Tillerson noted that the United States would be reviewing its travel advisories, and Warmbier’s case may prompt a travel ban for American citizens to the country.

Otto Warmbier will never again be able to indulge his curiosities to see the far reaches of the world. He will never be able to ask that question in class that might spark a professor’s thinking. But his case should be a cautionary tale for all others who consider travel to North Korea.

*The author is the D.S. Song-KF professor of government and director of Asian studies at Georgetown University.