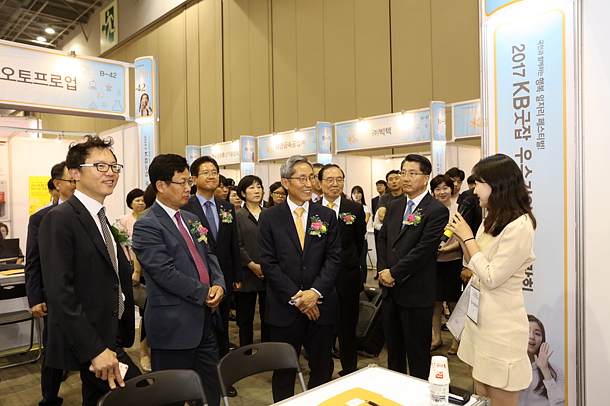 KB Kookmin Bank CEO Yoon Jong-kyoo, center, listens to a presentation from a human resources officer of a small business participating in the bank’s job fair at Kintex in Goyang, Gyeonggi, on Thursday. [KB KOOKMIN BANK]

The event, which kicked off Thursday at Kintex in Goyang, Gyeonggi, includes 250 leading small and midsize businesses, according to the bank. The companies plan to conduct 800 interviews and provide coaching for 1,500 job applicants.

KB Kookmin Bank has held 12 job fairs of this sort in the past six years and hopes its one-stop programs will set a new standard for such events.

“In order to create a society where every person is happy, it is urgent and important to create quality jobs,” Yoon Jong-kyoo, the bank’s chief executive officer, said during the fair’s opening ceremony. “KB Kookmin Bank will continue to be a financial partner for the people, a place where dreams and happiness can be shared through our own differentiated social contributions for creating jobs.”

“[The government] will work to create a society where people who create many jobs are respected and praised,” Lee said.

Since KB Kookmin first started the job fair project in 2011, it has been able to help over 6,500 people find work, according to the bank.

As of May 2017, over 13,000 companies have found applicants through the bank’s job fair. Some of the participating businesses are close partners of conglomerates.

Along with leading small and midsize companies opening up their own booths at the job fair, the event has a section where applicants can meet fintech companies currently receiving support from KB Financial Group, in line with the government’s push for companies to adopt technology associated with the so-called fourth industrial revolution.