How to fight karate

How to fight karate 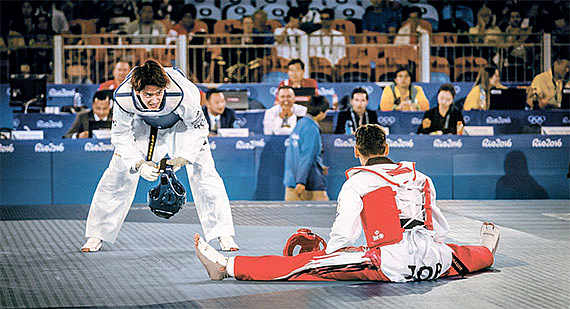 There are certain things or people in life that are so common that we don’t realize how valuable they are. We often take families, friends, air and water for granted. Taekwondo is one of those things for Koreans. Men, even those who did not learn martial arts in their childhood, are trained and get black belts while serving in the military. Women also are familiar with taekwondo, and even those who haven’t learned are close to someone having studied taekwondo.

It is unfortunate that taekwondo is not highly respected as it is too familiar, especially with taekwondo’s status as an Olympic sport being threatened. Karate, which used to be considered a martial art similar to taekwondo internationally, will be added the 2020 Tokyo Olympics as a temporary sport, and the two sports are competing to be included as a core sport.

The Japanese sporting world is preparing strategies to elevate karate’s international status at the 2020 Tokyo Olympic Games. While taekwondo events are to be held at the multipurpose stadium with other sports, karate will be held at Budokan, an arena that Japanese people highly respect. It is a strategy to package karate as a “high-end sport.” The organizing authorities are meticulously calculating when to hold the karate events so that they get the most attention during the Olympic period.

The taekwondo community’s response to karate’s challenge is lukewarm. The World Taekwondo Federation (WTF) is working to improve the image by modifying game rules and operation, but the efforts cannot be compared to Japan’s aggressive karate marketing. Funding is also short. A marketing manager at a conglomerate turned away taekwondo officials and said that the company didn’t want to highlight itself as Korean internationally by sponsoring taekwondo. It stands in comparison to the Japanese companies sponsoring karate, building studios and sending instructors in Africa and underdeveloped countries to promote karate for the Olympics.

A WTF official said, “Financial support is important, but creating a consensus to protect taekwondo at the Olympic Games is the priority.”

In the 1970s, karate failed to be chosen as a core sport and it took 40 years to build itself again. At this rate, taekwondo may be overwhelmed by karate and lose its status as the top martial arts. Three years remain, and we must not miss the chance to decide the future of taekwondo.