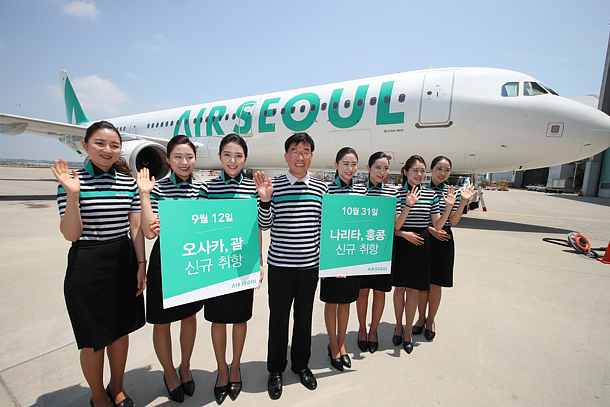 Air Seoul, a low-cost carrier owned by Asiana Airlines, hopes to turn a profit next year by strengthening its international operations.

The carrier plans to add two more planes to its fleet this year and launch new routes to Osaka and Narita in Japan, Hong Kong and Guam. Early next year, the company expects to add another two planes and begin service to the Philippines and China.

“Since starting operations in October last year, we have been recording deficits,” Ryu Kwang-hee, CEO of Air Seoul, said at a media conference held Thursday aboard one of its planes parked at Incheon International Airport. “But by expanding our fleet and strengthening our international operations, we hope to turn a profit next year.”

It would be the shortest time any Korean low-cost carrier has managed to get in the black if Air Seoul makes a profit next year, according to Ryu. The nation’s largest low-cost carrier, Jeju Air, started earning profit six years after it was founded in 2005.

Air Seoul started operations in October with three A321-200 planes fit for short-haul flights. In the first three months, the company recorded a net loss of 21.8 billion won. During the first quarter this year, it posted 5.8 billion won in losses.

“The aerospace business in general calls for massive investment in the early stages,” Ryu said. “But as we have already set up the basic infrastructure, there won’t be a significant increase in costs, so I think we might be able to see a turnaround next year.”

As part of its longer-term strategy, Air Seoul plans to add two planes each year for at least five years until its fleet totals 15. Ryu expects a fleet this size to help the company achieve earnings on part with competing low-cost carriers in Korea.

Service to Osaka and Guam will begin Sept. 12 and to Narita and Hong Kong on Oct. 12. After adding service to the Philippines and China’s Shandong Province next year, Air Seoul hopes to expand to Vietnam, Taiwan and Thailand, all popular vacation destinations for Koreans.

Unlike other Korean low-cost carriers, Air Seoul does not operate domestic flights. The CEO said the airline has no plans to launch domestic routes any time soon.

“The routes were hard to maintain with the cost structure of Asiana, which is a full-service carrier,” Ryu said. “After we took over, we have been seeing higher occupancy rates and improved profitability, though it’s still too early to assess our performance.”

Ryu assured that Air Seoul has no plans to close down any of the routes it is already operating.