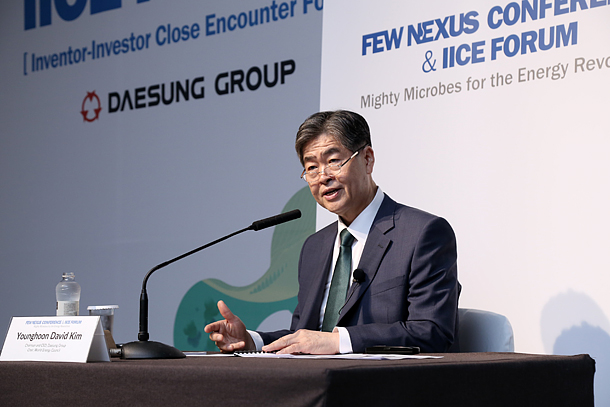 Younghoon David Kim, chairman and CEO of Korean energy conglomerate Daesung Group, speaks at the company’s energy conference in Shilla Hotel, central Seoul, on Thursday. Panels and academics at the conference discussed the potential microorganisms hold as the source of renewable and sustainable energy. [DAESUNG GROUP]

Daesung Group, a Korean conglomerate specializing in the energy business, including city gas and renewable energy, held an energy conference on Thursday under the theme of “Mighty Microbes for the Energy Revolution” to celebrate the 70th anniversary of the company. Experts in biotechnology and microbiology gathered to discuss the utilization of microorganisms as the new source of renewable and sustainable energy.

“One of the most profitable businesses of Daesung comes from the landfill in Daegu where microbes produce methane gas by feeding on the waste,” said Younghoon David Kim, chairman and CEO of Daesung. “This business model itself has competitive edge enough to expand into other parts of the world.”

Kim explained that the productivity of microbial energy can be increased if it’s combined with other technologies such as synthetic biotechnology, which is why he decided to host experts and academics from around the globe to discuss the possibilities.

“Microbial biotechnology has proven itself already,” Lee Choul-gyun, professor of biological engineering at Inha University, said at the conference, held at Shilla Hotel in central Seoul. “When earth was formed, it had a hostile environment [for life] but the earth we have now is the work of microorganisms.”

Lee explained the vast potential microbes hold, which was echoed by others.

“Nature is self-sustainable and we need to learn how as well,” said Ioannis Ieropoulos, director of the Bristol BioEnergy Center. Ieropoulos’ research center has developed self-sustainable robots using microbial fuel cells. The director explained that in his lab, bacteria feeding on organic waste metabolize and generate electrons as byproducts. This was converted into energy through the fuel cell his team developed to operate robots.

Ieropoulos’ team is working on a project where microbial fuel cells go into the bricks of houses to become part of the structure. “The household becomes self-sustainable,” he said. “It would acquire the ability to clean its own waste and generate energy.”

While Ieropoulus talked about fusing fuel cell technology and microbiology, Lee Sang-yup, a professor of chemical and biomolecular engineering at Kaist, said bioengineering using microbes can be used to produce chemicals, fuels and materials. Lee is also the first Asian scientist to receive the James E. Bailey Award, an accolade recognizing contributions in the field of biological engineering.

“Various natural compounds can be produced by metabolically engineered microorganisms,” he said. His research team was able to create some non-natural chemicals, including lactam, using microbes that can also be used potentially in generating certain type of energy.

Experts at the conference said using microbes as an energy source is essentially recycling.

“Bacteria can be engineered to better absorb CO2 … [the] coming economy is a circular economy where we use and reuse, be frugal and not waste. Microbes can help achieve such a goal.” Lee Sang-yup said.

“We’ve learned that disruptive technologies will bring resistance by default,” said Ieropoulus, when discussing some of the difficulties that technologies for microbial energy may face. “Many technologies failed because they couldn’t survive such process … and the lab work is where [researchers] prove [technology] works, that it is not a myth.”

Kim of Daesung projected that in the near future, the global energy industry will be equally shared among fossil fuel, green energy sources such as solar and wind and another source of renewable energy, hinting that his company may make an aggressive investment in searching for that last piece of the puzzle.