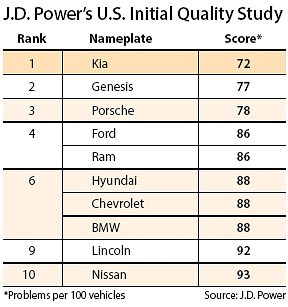 Its bigger affiliate, Hyundai Motor, ranked sixth out of 32 automakers.

The score is determined by the number of problems detected per 100 vehicles in 233 categories. The lower the score, the higher the quality.

The industry average is 97.

Kia’s back-to-back laurel is the first time a non-premium carmaker has ranked in the No. 1 spot for two consecutive years since the study began in 1987.

In third this year was Porsche with 78 points, followed by Ford and Ram, which each received 86 points to place in fourth.

Genesis Motors, the luxury division of Hyundai Motor which is participating in the study for the first time this year since being spun off from Hyundai, claimed the second spot with 77 points.

“Hyundai and Kia were able to grow into global carmakers amid fierce competition because of firm belief in ‘quality management,’” Hyundai Motor Group, the parent company, said in a statement. “We will continue to step further believing flawless quality is our biggest weapon that cannot be replaced by anything.”

Some Kia models were evaluated to have the highest quality among other models of the same segment. The Kia Forte received the best score in the compact car segment and the Soul in the compact multipurpose vehicle segment.

The Cadenza, Niro and Sorento were ranked highest in the large car, small SUV and midsize SUV segments, respectively.

When Hyundai and Kia first started receiving evaluations in 2000, they were each ranked 34th and 37th. The two automakers began moving up the list after Hyundai Motor Group Chairman Chung Mong-koo made concerted efforts to improve the quality of their cars, which were often derided as cheap and inferior.

In 2004, Hyundai Motor was ranked seventh. It placed third spot in 2006 and again received the same rank last year. It is Hyundai’s best performance so far.

Kia, on the other hand, which stayed below 10th until 2013, shot up to sixth in 2014 and has been improving since. It ranked second in 2015 before grabbing the top spot.