In dubbing, there’s one A-List: And when celebrities from the B-List are cast, fans go berserk

In dubbing, there’s one A-List: And when celebrities from the B-List are cast, fans go berserk 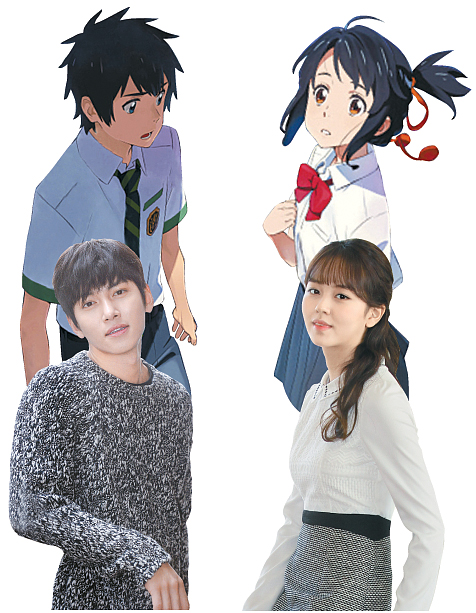 Media Castle’s decision in January to bring out a dubbed version of the hit Japanese animated film “Your Name” was widely welcomed by local fans. But that excitement turned to disappointment last week when the importer of the anime announced the voice casting. The lead rolls were given to Ji Chang-wook, 29, and Kim So-hyun, 18.

Many fans thought the casting was completely wrong, fueling a durable dispute over the use of mere celebrities to dub films rather than seasoned voice actors.

Boosted by the box office success of “Your Name,” which sold 3.65 million tickets in January and became the most popular Japanese anime in Korea ever, fans begged the distributor to let them pay to see it again, this time dubbed in Korean. Media Castle got the message. It unofficially told some reporters and fans five months ago that it would bring out a dubbed version, and would hold special auditions for the Korean cast of director Makoto Shinkai’s latest film.

“We needed someone who could portray romance between a man and a woman [through their voices],” Kang Sang-wook, director at Media Castle, said after the controversy erupted. “We couldn’t easily think of the right celebrities, so we decided to hold open voice auditions in the form of a variety show that anyone could take part in. We thought of something like ‘Superstar K.’”

That might have worked. But instead, the company simply cast Ji, known for the currently airing romantic-comedy television series “Suspicious Partner,” and Kim of the series “Let’s Fight Ghost” (2016) to play the teen leads Taki and Mitsuha, saying “the two well suit the young image of the characters.”

Those choices prompted a backlash from voice artists hoping to get the roles and from the anime’s fervent fans, who were expecting talent of a higher quality.

Voice actor Jeong Jae-heon, who played the fox Nick in Disney’s “Zootopia” (2016), took the issue to Twitter: “[Months] after creating a marketing ruckus by announcing live, open auditions, the final casting eventually landed on celebrities who will sell tickets through their fame and name value.”

Media Castle argues that it had to rush because Japanese distributor Toho Co. wanted to release a Blu-ray version and the dubbed version had to precede that. That explanation didn’t appease the hard-core fans.

“I hate it,” wrote one on social media. “I was anticipating the dubbed version so much… Animated films with cinematic value don’t usually cast celebrities.”

“We watch dubbed version to listen to Korean voice artists, not [to hear the voices of] celebrities,” wrote another.

“Are there not enough voice artists in Korea?,” complained another. “Why on earth are we leaving behind professionals and relying on celebrities?” 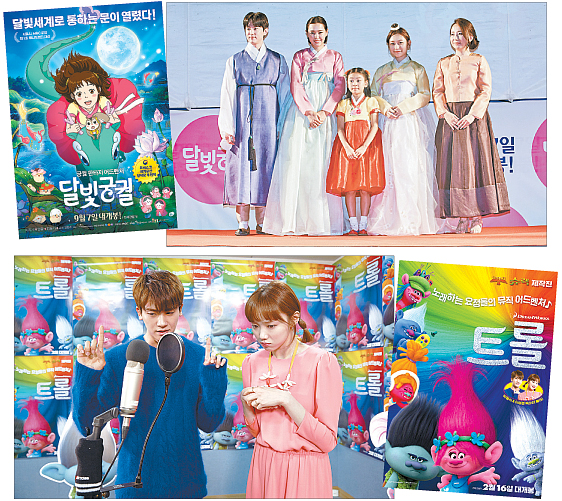 “The problem is that voice artists’ professionalism is not properly acknowledged,” said culture critic Hwang Jin-mi. “Voice artists act with their voices, and therefore, their faces don’t need to be revealed. That makes voice artists less famous in this society, where appearance really matters, resulting in the casting of more recognized celebrities who can contribute to selling more tickets.

“Though voice actors are clearly better at dubbing, [film companies] put forward popular celebrities and use their appearance as a marketing tool,” according to Hwang.

Film critic Kim Hyung-seok, on the other hand, believes celebrities can do the job.

“There are many cases in which celebrities successfully pull off dubbing,” Kim said, citing actress Kang Hye-jung and Kim Soo-mi’s roles in the 2006’s “Hoodwinked.” “Voice artists and actors do the same job in the sense they both act. Going with actors isn’t a bad choice.”