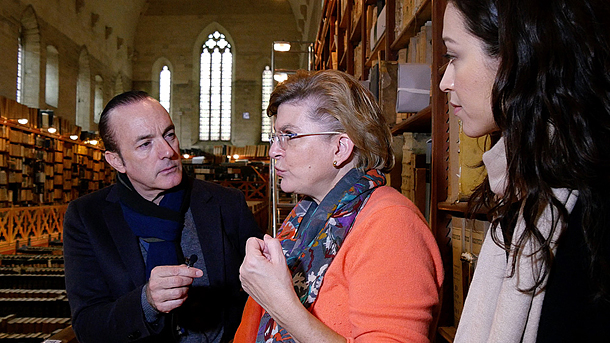 Johannes Gutenberg is known to the world as the inventor of the printing press. Though the German printer’s 15th century technological contribution brought about a revolutionary change, historians for years have believed that the first known use of movable metal type was in the “Jikji Simche Yojeol,” a book containing the essentials of Zen Buddhism printed in 1377 during the Goryeo Dynasty (918-1392) - more than 70 years ahead of the Gutenberg Bible, which was printed in 1455.

Is there any chance that the movable metal type in the West was created under the influence of Korea’s Jikji? This is the question that hit Canadian director David Redman when he first learned about Jikji, which Unesco confirmed to be the world’s oldest metal type print in 2001.

To find the answer, Redman contacted Korean director Chung Ji-young (“Unbowed”) to make a documentary tracking down the possible link between Jikji and the invention of Gutenberg’s movable printing press. He argues against Western records that say Gutenberg independently invented the technology.

Titled “Dancing with Jikji,” Chung produced the documentary while Redman and filmmaker Woo Kwang-hoon were behind the camera.

“My intention was to promote Jikji to the West when I first started [working on the movie],” Redman said during the press preview held Wednesday in central Seoul. The director explained that he was upset about Korea’s national treasure not getting proper attention and added that though the documentary may not be able to completely change minds in the West, it at least would be a good start.

The documentary depicts the journey of Redman and his crew heading to Europe to visit museums and meet scholars who can provide evidence of Jikji’s influence. They suffer a number of challenges, including being denied by the National Library of France, where Jikji is stored, the ability to see or film the artifact for “preservation” reasons.

“We originally planned four months for this project, but it ended up taking three years,” said Woo. “Though it was very challenging, we hoped to make a suspenseful movie similar to ‘The Da Vinci Code.’ And it was very interesting as we tried to approach the film from [the perspective of people outside of Korea] instead of [Korea’s] nationalistic point of view.”

The documentary is slated to hit theaters on Wednesday, and is rated G.