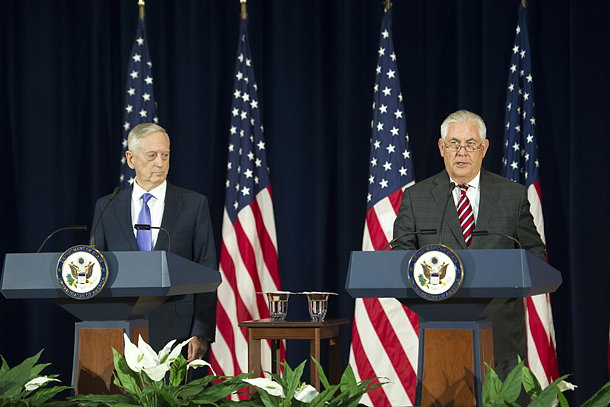 Secretary of State Rex Tillerson, right, and Secretary of Defense Jim Mattis appear at a news conference following a Diplomatic and Security Dialogue Meeting with a Chinese delegation including State Counselor Yang Jiechi and military Chief of Joint Staff Fang Fenghui, at the State Department in Washington, Wednesday. [AP/YONHAP]

The United States and China agreed to tighten sanctions on North Korea by banning companies of the two countries from doing business with UN-blacklisted North Korean companies.

“We both agreed that our companies should not do business with any UN-designated North Korean entities in accordance with these resolutions,” said U.S. Secretary of State Rex Tillerson before reporters on Wednesday following a meeting with his Chinese counterpart Yang Jiechi.

The two nations reached the agreement following a round of meetings for the inaugural Diplomatic Security Dialogue in Washington, involving Secretary of State Tillerson, Defense Secretary Jim Mattis and their Chinese counterparts Yang, state councillor of China, and Fang Fenghui, chief of joint staff for the People’s Liberation Army.

Washington has long urged Beijing to exert more pressure on its longtime communist ally to halt its missile and nuclear program, a demand that Washington views as largely unmet.

Touching on that demand, Tillerson said during the briefing that he made it clear to his Chinese counterparts that Washington sees North Korea as its “top security threat.”

Tillerson added, “We reiterated to China that they have a diplomatic responsibility to exert much greater economic and diplomatic pressure on the regime if they want to prevent further escalation in the region.”

Stressing the gravity of security problems posed by the North, he noted that Pyongyang’s military action was “the most acute threat in the region” and said the United States “called for complete, verifiable and irreversible denuclearization of the Korean Peninsula.”

While Beijing agreed to the latest punitive measure, it remains to be seen how aggressively it will indeed pressure the North, for which Beijing is practically a lifeline by supplying it crucial energy resources such as oil. Tillerson, however, said he hopes “China will do their part.”

Earlier Wednesday, U.S. frustration with China’s participation so far became evident when President Donald Trump’s posted a message on Twitter saying, “While I greatly appreciate the efforts of President Xi & China to help with North Korea, it has not worked out. At least I know China tried!”

At the press briefing, Defense Secretary Mattis vented his anger at North Korea in the wake of Otto Warmbier’s death. Warmbier passed away on Monday, just days after his homecoming, following 17 months of captivity in North Korea. Mattis called the North’s treatment of the young American “beyond any kind of understanding of law and order.”

Warmbier’s death has aggravated public sentiment in the United States and prompted the Trump administration to consider a ban on U.S. travel there, according to the Associated Press. The consideration came as Trump called the North’s captivity of the now-deceased Warmbier a “total disgrace.”