Blue House road will be opened to public at night

Blue House road will be opened to public at night 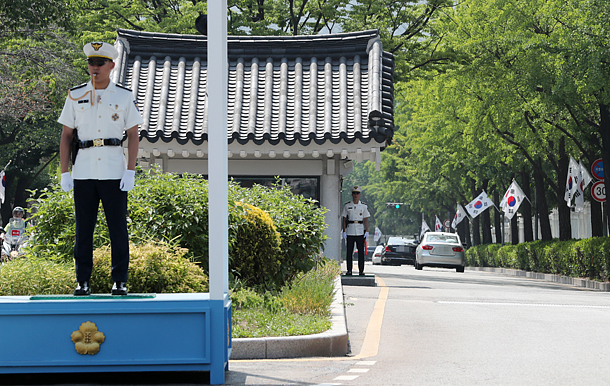 The half-century-old nighttime closure of the road in front of the Blue House, imposed after North Korean commandos’ failed assassination attempt of then President Park Chung Hee in 1968, will be lifted next week, the presidential security service said Thursday.

“Routine identification checks at five checkpoints near the Blue House will end and road barricades will be removed,” said Park Soo-hyun, spokesman of President Moon Jae-in. “The road in front of the Blue House linking the presidential press center of Chunchugwan and the water fountain will be open for public passage around the clock. The measure will allow free passage around Gyeongbok Palace at night. We expect it to become a landmark promenade of Seoul.”

Park also said tourists to the Blue House will be allowed to take pictures at most places except for restricted facilities.

“The measures will break the belief that the Blue House is an authoritarian space,” Park said, adding that it is a part of efforts to realize Moon’s pledge to relocate the presidential office to a more accessible location in Gwanghwamun, central Seoul.

Park also said an evening promenade with First Lady Kim Jung-sook is being prepared for 8 p.m. on Monday to invite the public to mark the measure.

The road in front of the Blue House has been shut down from 8 p.m. to 5:30 a.m. daily since the North’s failed infiltration attempt on Jan. 21, 1968. The commandos managed to approach a checkpoint less than 100 meters (109 yards) from the Blue House, but were challenged by local police officers. After a shooting broke out, the infiltrators dispersed. A sweep followed, in which 29 of the commandos were killed, one was captured and one escaped. South Korea suffered the loss of 30 soldiers and police officers and eight civilians.

Joo Young-hoon, head of the Presidential Security Service, said he is confident the service’s upgraded capabilities will still provide Moon the necessary protection.