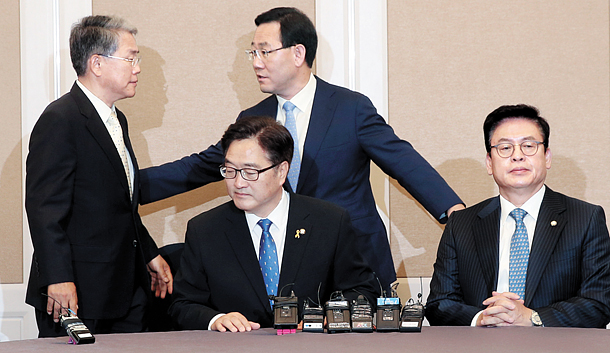 Floor leaders of the ruling Democratic Party and three opposition parties gather at the National Assembly on Thursday to narrow their differences and put the parliament back to work. The four, however, failed to produce a joint agreement as the ruling party and opposition remained at odds over the Moon Jae-in government’s supplementary budget bill of nearly $10 billion. After the talk fell through, the parties convened a plenary session later Thursday and passed a bill revising the political fund act, enabling parties to collect donations of up to 5 million won ($4,375) from individuals a year. With the revised act, political parties are now able to assume a fundraising role they lost in 2006. Since 2006, parties could only receive funding through the National Election Commission. [PARK JONG-KEUN]