The perils of engagement

The perils of engagement 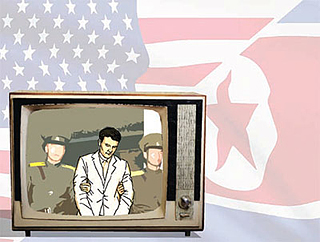 I have always believed — and continue to believe — that the United States and South Korea have no choice but to engage North Korea. The reasons have nothing to do with idealism or altruism; the regime is loathsome and we forget that fact at our peril. The reason we need to engage North Korea is completely self-interested. I don’t see the Kim family dynasty collapsing any time soon. Regime change is not a policy; it is wishful thinking. If we want to advance the cause of peace and security on the peninsula, North Korea needs to be part of the equation.

But the time since President Moon Jae-in’s inauguration has been a lesson book on the risks. Let’s start with President Moon, whose strategy was quickly put to the test by the North. Pyongyang is doing everything in its power to gain the upper hand in the relationship, and in such a setting, eagerness is costly.

First, the president has argued that North-South relations cannot be separated from the nuclear track: progress on one is dependent on progress on the other. The North Korean response? To test. Will the president hold to that formulation or back away?

Second, the president took the small but important step of disentangling the government from humanitarian efforts with the North. If private groups want to provide support, why should they blocked from doing so? The North Korean response? Not so fast, aid will be given on Pyongyang’s terms.

And in one of North Korea’s more despicable games, South Korea remains hostage to its commitment to try to reunite families. The North Korean response? That family reunions are not a moral imperative for both sides. Rather, they are yet another tactical quid pro quo, tied in this instance to the return of the restaurant workers who fled North Korea for freedom in the South.

Lurking in the background is the biggest prize of all for the North: to get the flow of funds from Kaesong and Mount Kumgang restarted without having to make any concessions in return.

In his thoughtful speech on the anniversary of the June 15 joint statement, President Moon returned to an engagement formula that sounded more like Kim Dae-jung than Roh Moo-hyun. The key difference: Kim’s starting point was that provocations will not be tolerated. But the dilemma is readily apparent. If President Moon sticks to this formulation, his policy toward the North could look surprisingly like trustpolitik, with small initiatives never really scaling up to anything significant.

Which brings us to what might be learned from Dennis Rodman and Otto Warmbier. Rodman’s visits to North Korea have been the object of derision in the United States. Particularly embarrassing was his crooning of “Happy Birthday” to the “dear marshal.” But one of the features of a free society is that people enjoy the right to do and say stupid things, in the deeply held belief that liberty will also generate new ideas and innovation.

President Moon should stick to another insight of Kim Dae-jung, one which the former president violated in the first summit: the separation of politics and economics. The Moon administration should continue to liberalize the movement of groups and individuals to the North. Whether humanitarian, social and cultural activities occur should not be driven by government but by civil society. I would extend this idea to lifting the post-Cheonan sanctions.

Reopening Kaesong and Mount Kumgang puts the government back at the center of North-South economic relations. But that is not what we want. We want the private sector to make decisions about entering North Korea based not on insurance provided by Seoul, but by the policy environment created by Pyongyang. The Moon administration could maintain its commitment to multilateral sanctions passed by the UN Security Council while at the same time providing companies the right to do business if they see it as profitable. The key advantage of this approach: it shifts the onus for the success of projects from South to North.

Finally, a word about the tragedy of Otto Warmbier. The stoic and poised interviews granted by Warmbier’s father have resonated widely in the U.S. They have generated a story line of courage and a family being reunited under the saddest of all conditions. South Koreans can certainly sympathize, as the conditions bear such a strong resemblance to the divisions on the peninsula. But at one point, he misinterpreted how his son’s release came about. It was not that the Trump administration threatened the North to win Otto Warmbier’s release. He was released by careful opening of a diplomatic channel, first in Oslo and then in New York.

Before we start throwing around the resumption of inter-Korean projects, both South Korea and the United States need to simply open a channel. Such a channel not only provides a chance to find out more about what the North Koreans want, but also to deliver first-hand what South Korea wants. Again, engagement should not be about idealism or altruism. If not grounded in self-interest, it will go nowhere.